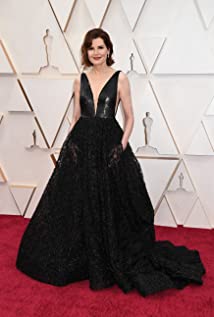 As a child, Geena dreamed of being an actress. While in high school, she felt left out and had low self-esteem because, at 6 feet, she was the tallest girl in school. After high school graduation, Geena entered New England College in New Hampshire and then transferred the next year to Boston University, where she majored in drama. In 1977, she graduated and moved to New York to start her career. Her career consisted of sales clerk and waitress. She worked at Ann Taylor, where she eventually rose to Saturday window mannequin while trying to get a job with a modeling agency. Eventually signed by the Zoli Agency, she wound up as a model in the Victoria Secret's Catalogue. Ever vigilant, Sydney Pollack was looking for new talent in the catalog when he spotted Geena and cast her in Tootsie (1982). With good reviews, Geena moved to Los Angeles where she was cast as Wendy in the short-lived but critically acclaimed television series Buffalo Bill (1983) with Dabney Coleman. A starter marriage to restaurant manager Richard Emmolo dissolved around this time. Her next appearance on television was in her own series Sara (1985), which was also good, but soon canceled. Geena then returned to the big screen in the below-average Transylvania 6-5000 (1985) followed by the successful Chevy Chase movie Fletch (1985). From there on, she was on a roll with second husband Jeff Goldblum in the horror remake The Fly (1986). More successful were Tim Burton's dark comedy Beetlejuice (1988) and The Accidental Tourist (1988). For the last film, she was the surprise winner of the Oscar for Best Supporting Actress. More fun movies followed with the flying-saucer-in-the-pool Earth Girls Are Easy (1988) and everyone-loves-a-clown Quick Change (1990) with Bill Murray. The very successful Thelma & Louise (1991), directed by Ridley Scott, again garnered nominations for the Academy Award and Golden Globe. A League of Their Own (1992), with Tom Hanks and directed by Penny Marshall, was the turning point as her next film, Hero (1992), was only average. Then she married director Renny Harlin and they set up a production and development company called "The Forge". Their first film was Speechless (1994), which flopped at the box office. Undeterred, Renny decided to film the big-budget Cutthroat Island (1995), starring Geena as pirate leader Morgan, which also flopped. Geena has since starred in the thriller The Long Kiss Goodnight (1996) and played Eleanor Little in Stuart Little (1999) and Stuart Little 2 (2002). She's also returned to TV, headlining The Geena Davis Show (2000) and Commander in Chief (2005). Both shows were canceled after one season, but she won a Golden Globe for the latter. Since 2001 she has been married to her fourth husband, neurosurgeon Reza Jarrahy, and they have three children. In 2008, after being missed from the big screen for some years, Geena ventured to Sydney, Australia, playing the foul-mouthed mother of Harry Cook and Harrison Gilbertson to shoot the dark comedy Accidents Happen (2009).