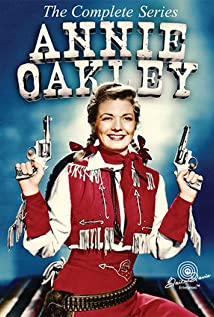 Hailed by Gene Autry as the 'perfect western actress', diminutive, pig-tailed Betty Jeanne Grayson had all the genre's prerequisite attributes. The daughter of a prominent Arkansas physician (who went on to became State Health Officer), she had been trained in drama and dance at the University of Texas. More pertinently, she was of an athletic disposition, a keen swimmer, golfer and tennis player. She was also an ace rider (to the extent of performing in rodeos), as well as an expert trick shot. Her arrival in Hollywood happened some time in 1946. Thereafter, sources vary as to how she got into movies. One account has her being spotted by an MGM talent scout while working as a hat check girl, while another asserts that she had previously met Autry while performing amateur dramatics at a camp show for the Army Air Force. The story further goes, that Autry (who was serving in the military at the time) was so impressed with her, that he told her to look him up later at Columbia studios.Gail's looks, feisty personality and tomboyish aptitudes soon got her cast in outdoorsy films. She went on to co-star opposite Autry (who prompted her change of name to 'Gail Davis') in fifteen of his films, as well as appearing at least a dozen times as different characters on his TV show. Gail tended to do all of her own stunts. She became sufficiently popular for Autry to produce Annie Oakley (1954) (through his Flying A Productions), starring Gail as the gun-toting titular heroine, invariably disarming (rather than killing) assorted screen villains with her Single Action Army Colt. Gail thus achieved an additional measure of prominence by becoming the first female to command the nominal lead in a western TV series. For this, she was awarded a star on the Hollywood Walk of Fame.

They Live by Night

The Judge Steps Out

The Romance of Rosy Ridge