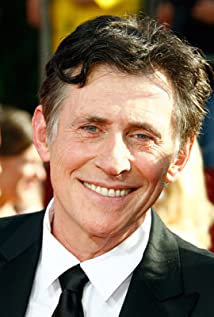 Byrne was the first of six children, born in Dublin, Ireland. His father was a cooper and his mother a hospital worker. He was raised Catholic and educated by the Irish Christian Brothers. He spent five years of his childhood in a seminary training to be a Catholic priest. He later said, "I spent five years in the seminary and I suppose it was assumed that you had a vocation. I have realized subsequently that I didn't have one at all. I don't believe in God. But I did believe at the time in this notion that you were being called." He attended University College Dublin, where he studied archeology and linguistics, and became proficient in Irish. He played football (soccer) in Dublin with the Stella Maris Football Club.Byrne worked in archeology after he left UCD but maintained his love of his language, writing Draíocht (Magic), the first drama in Irish on Ireland's national Irish television station, TG4, in 1996.He discovered his acting ability as a young adult. Before that he worked at several occupations which included being an archaeologist, a cook, a bullfighter, and a Spanish schoolteacher. He begin acting when he was 29. He began on stage at the Focus Theatre and the Abbey Theatre in Dublin, later he joined the Royal Court Theatre and the Royal National Theatre in London.Byrne came to prominence on the final season of the Irish television show The Riordans, later starring in the spin-off series, Bracken. He made his film début in 1981 as Lord Uther Pendragon in John Boorman's King Arthur epic, Excalibur.Byrne is featured as therapist Dr. Paul Weston in the critically acclaimed HBO series In Treatment (2008).In his return to theater in 2008, he appeared as King Arthur in Lerner and Loewe's Camelot with the New York Philharmonic which was featured in a PBS broadcast in the Live From Lincoln Center series in May of 2008.Byrne did not visit America until he was 37. In 1988, Byrne married actress Ellen Barkin with whom he has two children. The couple separated amicably in 1993 and divorced in 1999. Byrne resides in Brooklyn, New York.In November 2004, Byrne was appointed a UNICEF Ireland Ambassador.In 2007 Byrne was presented with the first of the newly created Volta awards at the 5th Jameson Dublin International Film Festival. This was for lifetime achievement in acting. He also received the Honorary Patronage of the University Philosophical Society, of Trinity College, Dublin on February 20, 2007. He was awarded an honorary degree in late 2007 by the National University of Ireland, Galway, in recognition of Byrne's "outstanding contribution to Irish and international film".

Death of a Ladies' Man