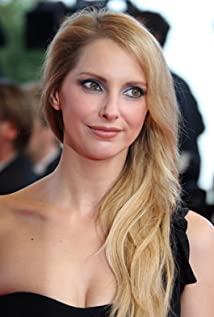 Frédérique Bel was born in Annecy in the department of Haute-Savoie. Her parents both owned a small shop and because of their tough living, she worked for them during eight years. After obtaining her high school final exam, she moved to Strasbourg and studied at the university graduating in both modern literature and history of arts, in order to become a teacher. Due to her pretty face, her slender silhouette and her perfect measurements, she then started a modeling career and participated at a number of fashion shows for various brands like Chanel. In the meantime, she also attempted beauty contests and has appeared in several advertisements. She then made her acting debut in 2000 playing a small role in the comedy film Deuxième vie (2000) and later in the comedy film The Dope (2003), and television series Le groupe (2001) where she only briefly appeared. She rose to fame in 2004 for playing Dorothy Doll in the sequence "La Minute Blonde" from Le grand journal de Canal+ (2004), in which she portrays a blond stereotype often dressed in eccentric outfits like a silver suit or long white boots. The character was kind of an ironic image against misogyny. In each sequence, she talks and makes small sketches to a celebrity who is in fact in black and white and made of cardboard. The sequence was broadcast on the first and second season until 2006.She also had in between famous supporting roles in comedy and romantic films including Tu vas rire, mais je te quitte (2005), Russian Dolls (2005), A Ticket to Space (2006) in which she portrays a dippy Miss France and Camping (2006). She played one of the main roles in Change of Address (2006), the first romantic comedy directed by Emmanuel Mouret and also starring himself. She later played in two other of his films, Shall We Kiss? (2007) and Please, Please Me! (2009). She has played guest roles in some television series like in the sixth season of historical fantasy series Kaamelott (2004) portraying the servant of Caesar, and the third season of Profilage (2009) where she portrayed a manipulating lawyer. She has also had a regular role from the fourth to the sixth season of Fais pas ci, fais pas ça (2007), series in which Belgian comedian Stéphane De Groodt also had a guest role in the sixth season. She played a small role in the fifth season of comedy series Scènes de ménages (2009) where she portrayed an assistant of one of the main characters, and later in one episode of comedy series Nos chers voisins (2012) where she had a guest role in a special broadcast.Since 2007, Frédérique Bel has also had a few roles as a voice actress in both original and French dubbed versions of some films and television series. She started in the French version of animated series Tripping the Rift (2004) where she voiced the main character Six in the third season. She later voiced the character of Rose, mother of Arthur, in the original versions of animated films Arthur et la vengeance de Maltazard (2009) and Arthur 3: The War of the Two Worlds (2010), both directed by Luc Besson. She also voiced Barbie in the French version of animated film Toy Story 3 (2010), and later the same character in the animated short film Toy Story Toons: Hawaiian Vacation (2011). In addition of her acting career, she also appeared on March 29, 2013 as a contestant in the third episode of the French game show "Tout le monde aime la France" hosted by Sandrine Quétier, and where Élodie Gossuin was also a contestant in the same team. She has appeared as a guest in some television programs and talk shows like "Toute une histoire" hosted by Sophie Davant on April 29, 2014 and Comment ça va bien! (2010) hosted by Stéphane Bern on March 27, 2015 with her dog Joca.

The Student and Mister Henri