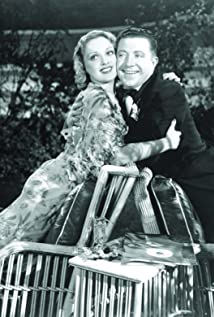 The parents of Frank McHugh ran their own stock company and he was on the stage as a child. When he was 10 he was part of an act that include his brother Matt McHugh and sister Kitty McHugh. After vaudeville and other stock companies, Frank debuted on Broadway "The Fall Guy" (1925). In 1930 he was hired at Warner Brothers as a contract player. Frank would usually play the sidekick to the lead actor and would provide the comedy relief in tense situations - if it were called for. With his nervous laugh and hangdog look, he appeared in over 90 movies in the first dozen years he worked at Warners. He would also appear with another very busy character actor, Allen Jenkins, in a dozen or so films. McHugh would be a mechanic, a song plugger, a pilot, a baseball player or a newspaperman, and would either be married or get the girl only if the girl was not the one the hero was interested in. Over the years he would work with most of the stars that Warners employed. By the early 1950s his film career started winding down. From 1964 to 1965 he played the role of Willis Walter on The Bing Crosby Show (1964).

Say One for Me

A Lion Is in the Streets