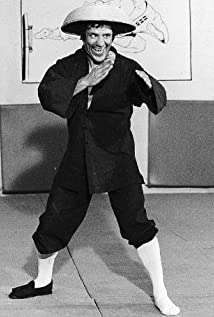 With to Totò and Peppino De Filippo, Franco Franchi and Ciccio Ingrassia has been the best couple of the Italian comic cinema. Both sicilian, of Palermo, began on the roads of sicilian city, in the tradition of the ballad singer and the actors of the Comedy of the Art. Scenes, imitations, witticism, movements of puppet that entertained the public gather around they. One of the interpretations more celebrates of Franco Franchi was the parody of Hitler: years after, in 1967, will re-propose it in the movie "Due marines e un generale", with Buster Keaton to his last film. The debut of the couple happens in 1954, to the theatre "Costa" of Castelvetrano (Trapani, Sicily). The execute a parody centralized on the song "Core 'ngrato". Ciccio tries to sing the song but he's often interrupted by Franco. The sketch collects much success because has got all the necessary one to true comic actor - the mimic art, the ability to invent witticismes, the comic times - and also for the scene in which Franco transformed him in the precisest balance.To the definition of the two personages has contributed Lucio Fulci, that directed them for the first time in 1962, in "I due della legione straniera". Was their first movie as protagonists, but - like the director in an interview has remembered - the film-producer, the Titanus, in that moment in phase of relaunching, did not think that it could to meet with success; for this reason don't appear like film-producer. The film instead obtained very success and so the producer decide to appear in the new edition of the movie. Franco and Ciccio are launched in a series of movies and many parodies of every kind: from the Western to the Action, the Thriller to the Comedy. When Sergio Leone direct "Per un pugno di dollari" and "Il buono, il brutto, il cattivo", Franco and Ciccio are the protagonists of "Per un pugno nell'occhio" and "Il bello, il brutto, il cretino". To the movie "Indovina chi viene a cena", a manifesto of the antiracism in the American society, of the end of the Sixty, Franco and Cicco answer with "Indovina chi viene a merenda". In 1972, they play the parody the Thriller; that one of the DarioArgento of "Il gatto a nove code" (more "the American" of "the animal" trilogy). Directed by Richard Kean (Osvaldo Civirani), is "Due gattoni a nove code... e mezzo ad Amsterdam", in the part of two photographers to the center of an intrigue, after to have photographed a man. In 1973, Franco, directed by Nando Cicero, is the protagonist of "Ku fu? Dalla Sicilia con furore", parody of "Dalla Cina con furore", the movie with Bruce Lee.In 1975, Ciccio directs and interprets "L'Esorciccio", parody of "L'Esorcista", whose popularity and consideration from part of the critic increase proportionally with pass of the years. Beside he there is not Franco; to his place Lino Banfi, that began to define the personage with which has become famous. To part the surrealistic scene of beginning, with Ciccio, archaeologist, that discovers the famous medallion, from which part all the vicissitude, the movie is characterized from a series of original ideas - the location in the Latium province, the passage of the object, the final scene - than renders one of the more amazing parodies in the italian cinematography, and initiator of a kind ("Frankenstein Junior", by Mel Brooks, is of some year after). Their cinematographic activity has been frantic, above all from the half to the end of Sixties. Between 1964 and the 1966 interpreted approximately forty films. To this purpose, they did not lack to remember the frenzy during this period, when they were found again to work also in three movies in the same day and to change the dresses of scene in car, during the movement from a set to the other. In kind it was be a matter of movie in which the script was reduced to the minimum and the film-producer counted on their ability to make all the movie, in order to reduce the costs and therefore the financings, knowing that then however at least it would have tripled to box-office the investment. Franco and Ciccio worked very much, accepting all the script proposed. Because - they remembered with pride and bitterness - feared to remain without job. They knew the value of the job, because had known the poverty.Directed by Pier Paolo Pasolini, Franco Franchi and Ciccio Ingrassia, have the first role to outside of the sort until then followed. With to Totò, they recite in "Che cosa sono le nuvole?", third episode of the movie "Capriccio all'italiana" (1967). Ciccio had all the characteristics for being also interpreter of personages different from those of Italian comedy. In "Amarcord", Federico Fellini entrust to him the part of a man with a from the troubled destiny, perhaps the personage more famous of this movie. The face of Ciccio Ingrassia was a commutabile mask from the comicality to the drama, natural, whose distinguishing features seemed remodeled with the life, from first part of the his existence, that one o

I due gattoni a nove code... e mezza ad Amsterdam