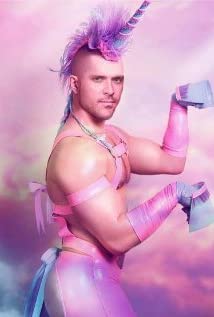 Ford Austin is an American stage and motion picture actor who was born in Oklahoma and raised in Texas. He is a descendant of Stephen F. Austin. For much of the mid-1990s, Austin lived as an actor in Philadelphia & New York City making stage appearances in the Philadelphia premiere of The a Grapes of Wrath, the Homecoming, Death of a Salesman at The Papermill Playhouse (with Ralph Waite and Lisa Richards), Macbeth, Lawyers at Westport Country Playhouse (with Kevin Conway) and many more. While in New York, he appeared on television series like Another World and Saturday Night Live. In 2000, he made his feature film debut in the war film Pearl Harbor as one of the legendary Doolittle pilots under the direction of a Michael Bay. Austin gained wide recognition for playing Darwin in Vicky Jenson's Family Tree with Talia Shire and Harland Williams. The movie premiered at Sundance and won the jury prize at SXSW and became the darling of the film festival circuit before qualifying for the Academy Awards. Immediately following the films success, Austin landed a national tour of a one man show called MaleIntellect: An Oxymoron which he performed in for almost two years before returning to Hollywood to try his hand at writing & directing. At this time, he and a close friend Scott Ingalls wrote and directed the hilariously successful comedy series about The Wright Brothers called The Wright Stuff. The Wright Stuff premiered on Dan Harmon and Rib Schrab's Channel 101 network and ran for six months as a prime time show until it was canceled. After that, Austin wrote and directed another academy qualifier film called Tiny Dancer which he filmed on the backlot at Universal Studios. The motion picture featured a ballerina who uses her dancing to evade street punks. The dancing sequences were choreographed by Ballanchine dancer Zippora Karz and opened in theaters before becoming Austin's second Academy qualifying motion picture.About thus time, Austin was tapped by Stephen Chao (COPS, Americas Most Wanted) and Mike Goedecke of a Belief Design firm to launch an internet company called WobderHowTo.com. Austin became one of the first five hires of the new company where he was made a share holder in the corporation, named Vice President of Original Production and wrote, produced and starred in over 300 pieces of content for the company. Two years later, Austin returned to directing motion pictures under his own shingle The Ford Austin Company. Austin directed over a dozen Low budget horror features including The Curse of Lizzie Borden, Attitude for Destruction and his cult horror comedy classic Dahmer vs Gacy which won many awards for the actor turned director and was released in the Laemmle theater chain.On March 9th, 2011, while in production on seven feature motion pictures, Austin suffered a life changing car accident in Hollywood, California that brought everything to a halt. He spent two weeks in a coma followed by five months at Cedars Sinai Hospital in Los Angeles. Doctors gave him a 1% chance of survival and said he would probably never walk again. Defiantly, Austin stayed in process and worked from his hospital bed during his hospital stay. He produced the feature documentary The Right to Love:An American Family with Cassie Jaye and would eventually attend the motion picture's premiere at George Lucas' Skywalker Ranch in Marin, California. The movie would also become Austin's third Academy Awards qualifying motion picture. When he arrived home from his first of seven hospitalizations, Austin found a copy of Variety on his deck which had a full page ad for another motion picture he was producing before his accident called The Ghostmaker released by Lions Gate Entertainment. Austin relocated to New York City where he had more hospitalizations and surgeries. During his recovery from the procedures, he created, produced and pitched a clip show to Time Warner Cable in Manhattan called The Angry Baby Monkey Short Film Showcase and completed a 26 episode sale that aired in New York City for a year.In 2012, Austin,fully recovered from his injuries, and his amazing wife Lauree Dash returned to work in Los Angeles. He joined The Actors Studio as a Lifetime Member where he studies with Mark Rydel, Lou Antonio, Lisa Richards, Cathleen Leslie, James DiStefano, Allan Miller and his mentor Martin Landau.