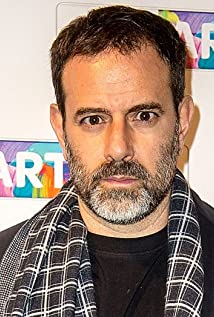 He didn't become famous until 2006, although he had been working in movies and television for over a decade. Like many other aspiring filmmakers living in the Rome area, Fausto Brizzi studied at the Centro Sperimentale, and after graduating in 1994 he started looking for work. Initially, the 28-year old was employed exclusively in the production of stage plays, and it took Brizzi another four years before he got his first major job: writing the script of the TV series _"Lui e lei" (1998)_. Other small-screen projects followed, cementing his reputation as one of Italy's most prolific screenwriters.The transition from television to cinema took place in 1999, when renowned producer Aurelio De Laurentiis, nephew of Dino De Laurentiis, asked Brizzi to write _Tifosi (1999)_, a Christmas comedy starring Massimo Boldi and Christian De Sica. The film performed quite well at the Italian box office (as is customary with the Boldi & De Sica movies), prompting De Laurentiis to keep Brizzi on board. Fame, however, kept remaining elusive. Something different was needed...That something was a screenplay he had written and offered to several high-profile directors, all of whom turned down the project: they didn't believe a low-budget comedy revolving around high school students graduating in 1989 would have any mainstream appeal. At this point, Brizzi took the risk of directing the film himself. This kind of decision could have ruined his career, but instead it made him a celebrity: despite, or perhaps because of, the unfamiliar names behind and in front of the camera, Notte prima degli esami (2006) became the most successful film made by a first-time director in Italian movie history. A sequel of sorts, Notte prima degli esami- Oggi (2007), was released a year later to equal success, confirming Brizzi's status as the most popular filmmaker among Italian teenagers. His new movie, Ex (2009) was a success and, after 10 nominations at David di Donatello Award, gained the Silver Ribbon for the Best Comedy in Italy.

It's All About Karma

In guerra per amore

The Mafia Kills Only in Summer

10 Rules for Falling in Love

Love Is in the Air