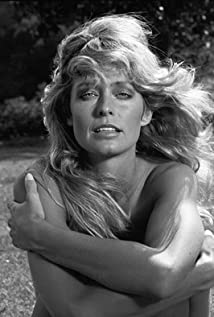 Farrah Fawcett is a true Hollywood success story. Born in Texas, she was the daughter of Pauline Fawcett (Pauline Alice Evans), a homemaker, and James Fawcett, an oil field contractor. She was a natural athlete, something that her father encouraged, and she attended a high school with a strong arts program. She attended the University of Texas in Austin, graduating with a degree in Microbiology, but only wanted to be an actress.Winning a campus beauty contest got her noticed by an agent, who encouraged her to pursue acting. After graduating, she moved to Los Angeles and her healthy, all-American blond beauty was immediately noticed. She quickly got roles in various television commercials for such products as Ultra-Brite toothpaste, and Wella Balsam shampoo, and also made appearances in some TV series. In 1968, she met another Southerner, actor Lee Majors, star of the popular TV series The Big Valley (1965), on a blind date set up by their publicists. He became very taken with her and also used his own standing to promote her career. In 1969, she made her film debut in Love Is a Funny Thing (1969). The next year, she appeared in the film adaptation of the Gore Vidal bestselling novel Myra Breckinridge (1970). The shooting was very unpleasant, with much feuding on the set, and Farrah was embarrassed by the finished film, which was a major failure. But Farrah was undamaged and continued to win roles. In 1973, she and Majors married, and the following year, she won a recurring role in the crime series, Harry O (1973). She had her first taste of major success when she won a supporting role in the science fiction film, Logan's Run (1976). She came to the attention of the highly successful producer Aaron Spelling, who was impressed by her beauty and vivacious personality. That won her a role in the TV series, Charlie's Angels (1976). She played a private investigator who works for a wealthy and mysterious businessman, along with two other glamorous female detectives, played by Kate Jackson and Jaclyn Smith. The show immediately became the most popular series on television, earning record ratings and a huge audience. All three actresses became very popular, but Farrah became, by far, the best known. She won the People's Choice Award for Favorite Female Performer in a New TV program in 1977. Her lush, free-wheeling, wavy blond hair also became a phenomenon, with millions of women begging their hairstylists to give them "The Farrah", as her hairstyle was called. Fawcett was also a savvy businesswoman, and she received 10% profit from the proceeds of her famous poster in a red swimsuit. It sold millions and she became the "It Girl" of the 1970s.Fawcett was America's sweetheart and found herself on every celebrity magazine and pursued by photographers and fans. While she enjoyed the success and got along well with her co-stars (both of whom were also of Southern origin), she found the material lightweight. Also, the long hours she worked were beginning to take a toll on her marriage to Majors, who found himself eclipsed by her popularity. So the following year, when the show was at its peak, she left to pursue a movie career. Charlie's Angels' producers sued her, and the studios shied away from her, and she lost out on the lead role in the hit feature film Foul Play (1978) to Goldie Hawn. Eventually, she and the Charlie's Angels producers reached a settlement, where she would make guest appearances on the series. As a result of the negative publicity and some poor script choices, her career briefly hit a slow spot. In addition, she and Majors separated in 1979. She had starring roles in Somebody Killed Her Husband (1978), Sunburn (1979), and Saturn 3 (1980) (which she did a topless scene in), but all three failed financially. She appeared in the Burt Reynolds chase comedy The Cannonball Run (1981), which was successful financially, but it was met not only with bad reviews but also with bad publicity when Farrah's stunt double Heidi Von Beltz was involved in a stunt that went horribly wrong and left her a quadriplegic. Farrah's feature film career came to a halt, and she and Majors were drifting apart. In 1981, she met Ryan O'Neal, a friend of her husband's, and they began became friends and spent a great deal of time together. He also encouraged her to go back to television and she received good reviews in the well-received miniseries, Murder in Texas (1981). In 1982, she filed for divorce, which Majors readily agreed to. Soon, she and O'Neal were a couple and moved in together. She set on sights on becoming a serious dramatic actress. She took over for Susan Sarandon in the stage play, "Extremities", where she played a rape victim who turns the tables on her rapist. That, in turn, led her to her major comeback, when she starred in the searing story of a battered wife in The Burning Bed (1984), based on a true story. It garnered a very large audience, and critics gave her the best reviews she had ever received for her