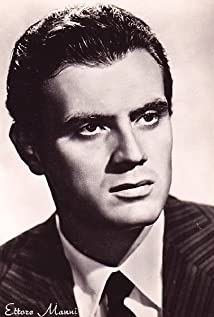 Dark, rugged and exceedingly good-looking, Italian actor Ettore Manni was a familiar presence in Neopolitan romancers and costumers. He also gave added stature to a number of peplum films and spaghetti westerns of the 1960s. On screen from 1952, he appeared in over 100 films in his close to three-decade career. Popular in his native country, he played opposite Italy's most scintillating leading ladies in his early movies -- Sophia Loren, Eleonora Rossi Drago and Gianna Maria Canale, to name a few, often playing the continental lover.Manni was born on May 6, 1927, in Rome, Italy, and came to films in 1952 with La tratta delle bianche (1952) [Frustrations] starring Rossi-Drago in which he was third billed. In 1952 and 1953 he was handed prime leads and supports in the Carlo Ponti/Dino De Laurentiis productions of The Three Pirates (1952) [The Three Pirates], Brothers of Italy (1952), The Devil Is a Woman (1953) and The Ship of Condemned Women (1953) the last two co-starring Kerima and May Britt. Ponti also paired Manni opposite his sultry-eyed wife Sophia Loren in Two Nights with Cleopatra (1954) playing Marc Antony to Loren's Cleopatra.Other strong roles followed for Manni. He played the brother of Anthony Quinn's Attila (1954), and was reunited with Rossi-Drago in both A Woman Alone (1956) and Le Amiche (1955), as well as with both Kerima and May Britt in Fatal Desire (1953). The quality of Manni's films declined into the late 50s and 60s but he found himself quite busy in such lowbudget fare as The Warrior and the Slave Girl (1958), The Pirate of the Black Hawk (1958) and Ten Ready Rifles (1959). He also appeared opposite lovely Linda Cristal's Cleopatra in Legions of the Nile (1959) and the equally fetching Debra Paget as Cleopatra's Daughter (1960).Sword-and-sandal spectacles became the rage during this time and Manni took full advantage with supporting roles in Hercules Conquers Atlantis (1961) starring Reg Park as the muscular titan, Hercules and the Masked Rider (1963), Hercules, Prisoner of Evil (1964) and Giants of Rome (1964) with Richard Harrison as the muscled hero. Manni also jumped on the "spaghetti western" bandwagon years later with appearances in the films Ringo and His Golden Pistol (1966), For a Few Extra Dollars (1966), The Stranger Returns (1967), Johnny Colt (1966), And Now I Recommend My Soul to the Lord (1968), I Am Sartana, Your Angel of Death (1969) and Stranger That Kneels Beside the Shadow of a Corpse (1970).Outside of Italy, Manni, who grew stockier in later years, could be found playing priests and officer parts. He appeared as Jason in a couple of the popular French "Angelique" series with Ontembare Angelique (1967) and Angelique and the Sultan (1968). Manni also lent support to a number of imported American/British male leads past their prime who found headlining work in Italy. These included The Valiant (1962) starring John Mills, Attack of the Normans (1962) starring Cameron Mitchell, Gold for the Caesars (1963) starring Jeffrey Hunter; War of the Zombies (1964) starring John Drew Barrymore, The Battle of El Alamein (1969) with Frederick Stafford, and in Bali (1970) with John Steiner. A supreme showcase role came his way during this period when he appeared opposite Jeanne Moreau in Mademoiselle (1966).In the early 1970s, Manni met gorgeous Austrian-born actress Krista Nell, who had leads and second leads in French and Italian films. Although they did not marry, they became longtime companions. They showed up together in the films Django and Sartana Are Coming... It's the End (1970) Versatile Lovers (1970) and Karzan, il favoloso uomo della jungla (1972). Sadly, Nell was diagnosed with leukemia and lost her battle against the disease in Rome in 1975. She was only 28.The grief-stricken Manni suffered from chronic depression following her death but continued to work in Italy, appearing in Risking (1976), Oh, Serafina! (1976), The Rip-Off (1977), Silver Saddle (1978), Hypochondriac (1979), The Truth on the Savolta Affair (1980), along with many TV projects.Much now has been said over the controversy of the actor's untimely death on July 27, 1979 in Rome. It was originally believed that the 52-year-old Manni, an avid gun collector, accidentally shot himself in the groin while cleaning or handling a gun. It is now believed he committed suicide. His final film, Federico Fellini's City of Women (1980) in which he supported Marcello Mastroianni, was released posthumously.

In nome del papa re