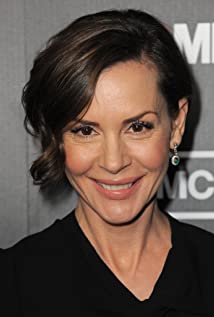 Embeth Davidtz was born on August 11, 1965 in Lafayette, Indiana. She is known for her role as Miss Honey in the film Matilda (1996).Her parents, Jean and John Davidtz, were South Africans, with Dutch, English, and French ancestry. The family moved to Trenton, New Jersey, before returning to her parents' native country, where her father was a university professor. Davidtz studied at Rhodes University. Her acting started with the National Theatre Company's "Romeo & Juliet" for which she received good reviews.She got a small role in South African-filmed American horror, Mutator (1989). She moved to Los Angeles in 1992, and landed a role in her first American film, Sam Raimi's Army of Darkness (1992). Also, she appeared Television film Till Death Us Do Part (1992). After Director Steven Spielberg cast her in Schindler's List (1993) as Helen Hirsch.In Matilda (1996), based on Roald Dahl's children's book, she played the role of Miss Honey. She is most often recognized for her role in this film. She also starred in the Bicentennial Man (1999), which was released in 1999. She got a supporting role in the film Bridget Jones's Diary (2001), as Natasha. Also in 2001, her role included horror thrillers Thir13en Ghosts (2001).In 2009, she played Felicia Koons on Californication season 3. Davidtz played in Marc Webb's Spider-Man reboots, as Peter Parker's mother, Mary Parker. She married Jason Sloane on June, 2002.

Tales of the Walking Dead

The Secret Life of Marilyn Monroe