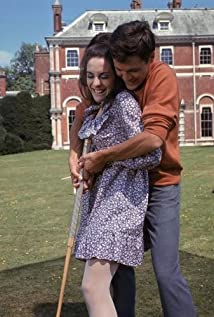 There is one strange, mesmerizing film scene that easily sums up the disturbing fascination Eleanor Bron brought to her characters on stage, TV and in the cinema. This is the classic fig-eating scene which she shares with Alan Bates in the Oscar-winning drama Women in Love (1969). It is not to be missed. A dark, cold-eyed, ethnic-looking beauty, the unsmiling Eleanor would typically be cast as unapproachable, unsympathetic and intensely neurotic second leads/supports in classy film drama and costumers. And yet, there was another distinct side to her as well. In direct contrast to all the murkiness usually associated with her, Eleanor was a talented writer and performer of TV series comedy!Eleanor was born in Stanmore, London in 1938 of Eastern European Jewish descent. The family's surname was Bronstein, but abbreviated to Bron by father Sidney, an established music publisher (Bron's Orchestral Service). She was educated at the North London Collegiate School and Newnham College, Cambridge. Older brother Gerry Bron later became a record producer (his Bronze Records label handled such rock groups as Uriah Heep) while another brother became a professor of medicine.Eleanor started her career off in comedy sharing the same stage with Peter Cook (of "Beyond the Fringe" fame) in a Cambridge Footlights revue entitled "The Last Laugh" in 1959. This led to a plethora of comedy offers, writing and performing satires and spoofs on both radio and TV from the late 60s on, including "Not So Much a Programme, More a Way of Life," "World in Ferment," "Where Was Spring", "Beyond a Joke" and "After That, This" -- often in tandem with writer John Fortune or actor/writer John BirdEleanor made her film debut in the prominent role of the high priestess Ahme in the Beatles' second feature film Help! (1965). In fact, she is often credited to having inspired the name of the Beatles' #1 pop song hit "Eleanor Rigby". She showed just as much promise as a doctor who comes into contact with Michael Caine's worldly lover Alfie (1966), and as part of a vacationing foursome alongside Albert Finney, Audrey Hepburn and William Daniels, who played her screen husband, in the tearjerker Two for the Road (1967). Here Eleanor shows off her "other woman" formidableness that would reappear time and again. That same year she reteamed with comedian Peter Cook, who by now was partnered successfully with Dudley Moore, in Bedazzled (1967), and was third-billed as pregnant Sandy Dennis' friend and confidante in A Touch of Love (1969) [aka "Thank You All Very Much"].Following her excellence as Alan Bates' supercilious wife in Women in Love (1969), and after a co-starring role in the satirical farce The National Health (1973), a biting comment on England's national health program, Eleanor was little seen in film, at least for the rest of the decade. TV took a good share of her time. Her features grew more severe as time passed and her characters more gargoyle-like. Unforgettable as Joanna Lumley's horror of a mother in episodes of the vitriolic comedy Absolutely Fabulous (1992), a softer core was occasionally glimpsed, as with her Virgin Mary in The Day Christ Died (1980), and her remote but touching Edith Frank in The Attic: The Hiding of Anne Frank (1988). Back to feature films she proved as repelling as ever playing the arrogant Lady Wexmire (again opposite Peter Cook) in Black Beauty (1994) and the harsh, witchy-like Miss Minchin in A Little Princess (1995). Her film output in later years would include The House of Mirth (2000), The Heart of Me (2002), Love's Brother (2004) and the tennis comedy/drama Wimbledon (2004).Throughout her career, Eleanor would maintain close ties with the classical and contemporary stage, giving vivid appearances in such plays as "The Doctor's Dilemma" (1966), "The Prime of Miss Jean Brodie" (1967), "Major Barbara" (1969), "A Day in the Death of Joe Egg" (1970), "Hedda Gabler" (1970), "Luv" (1971), the West End musical "The Card" (1973), "Two for the Seesaw" (1974), "The Merchant of Venice" (1975), "Private Lives" (1976), "Uncle Vanya" (1977), "The Cherry Orchard" (1978), "The Real Inspector Hound" (1985), "The Duchess of Malfi" (1985), "The Miser" (1991) and "A Delicate Balance" (1997). More recently she appeared in the musical "Twopence to Cross the Mersey" (2005) and the plays "The Clean House" (2006), "In Extremis" (2007) and "All About My Mother" (2007), and has also performed her own one-woman shows "On My Own" and "Desdemona: If You Had Only Spoken". In the 1980s she appeared frequently in Secret Policeman's Balls live benefit shows, working in tandem with her favorite, Peter Cook, and other top comic entertainers as Rowan Atkinson. She also appeared in the film version of The Secret Policeman's Other Ball (1982).Eleanor is the author of several books -- Life and Other Punctures is an account of bicycling in France and Holland; "The Pillow Book of Eleanor Bron, or An Actress Despairs" is a collection of notes and rememb

The Beatles in Help!

The Heart of Me

The House of Mirth