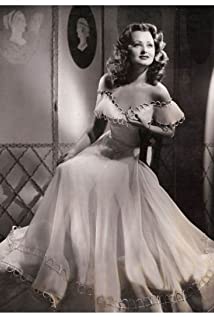 Elaine was born in East Liverpool, Ohio, to the engineer Allen B. Riley (owner of the local Riley Electrical Company) and his wife Pearl, on January 15 1917. Like other aspiring starlets, she took the route to Hollywood via beauty contests. She was elected 'Miss Chic' at the Cleveland exposition and was runner-up to the 'Miss Ohio' title in 1937. For a while Elaine performed as a vocalist with a dance band in and around Pittsburgh, billed as 'Elaine Gray'. Aged eighteen, she made her way to New York and started as a model for fashion designer G.W. Cohen, appearing for the first time on the cover of Glamour magazine. During the six years which followed, Elaine completed studies in dress design at the prestigious Traphagen School of Fashion, modelled for John Robert Powers and Hattie Carnegie and worked her way up from secretary to personnel manager of New York radio station WINS.Hollywood inevitably beckoned. In 1943, Elaine was spotted by a talent scout and signed by RKO. Her first year in pictures proved relatively unremarkable, consisting mainly of uncredited bits as hat check girls, secretaries and chorines - a far cry from her stated ambition to star in musical comedy, to become a second Carole Lombard! Paramount picked her up next. By the mid-40's, Elaine had found her niche as leading lady in Hopelong Cassidy westerns like The Devil's Playground (1946). On rarer occasions were supporting roles in A-grade features, such as the superior thriller The Big Clock (1948), starring Ray Milland. Being on the cover of Yank magazine as a popular wartime pinup certainly did Elaine's career no harm and she maintained a high profile by appearances at Hollywood Canteen, visits to army camps and by entertaining wounded servicemen at the Birmingham hospital in Van Nuys. From the early 50's, she remained comfortably ensconced in horse operas -- albeit on the small screen -- guesting frequently on series like The Gene Autry Show (1950), The Range Rider (1951) and, of course, Hopalong Cassidy (1952).When not in front of the cameras, Elaine enjoyed horse riding, swimming and golf. Until his death in 1994, she was married to the actor Richard Martin, best remembered as comic sidekick to actor Tim Holt in a long-running western series at RKO. She was a recipient in 2004 of the Golden Boot Award for distinguished contributions to the western genre. Elaine died in December 2015 at the great age of 98.

Every Girl Should Be Married