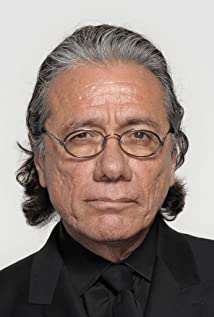 Edward James Olmos was born in Los Angeles, California, to Eleanor (Huizar) and Pedro Olmos, who was a mail carrier and welder. His family was of Mexican descent. If Olmos had followed the first love of his life, he would have been a professional baseball player. But by age 13, another love entered his life: rock music. By age 15, he was already an experienced rock singer, forming and reforming several "garage bands" along the way. During the late 1960s and early 1970s, he played the most famous clubs on Sunset Strip, including Gazzarri's and The Factory. But a friend suggested that, with his flair for the dramatic, he consider a career in acting. Throughout the 1970s, he divided his time between rock music gigs, acting classes, bit parts in television, Off-off-off Broadway plays and his business of moving fine furniture (which kept body, soul and family together). His first big break was a starring role in Luis Valdez's play, "Zoot Suit", in 1978. The play moved to Broadway and led to a Tony Award nomination and great critical acclaim.Perhaps best known for his role as Lt. Martin Castillo in the NBC television series Miami Vice (1984) (1984-1989), Olmos has been seen in numerous film and television productions. He received an Academy Award nomination for Best Actor for his starring role in Stand and Deliver (1988). Most notable of his recent offerings is American Me (1992), which was also his directing debut. But acting, directing and screenwriting are only parts of what he does. Olmos contends he would much rather be known as an activist than an actor. He devotes much of his time to causes, particularly those focusing on the needs and rights of children. He makes, on average, some 150 personal appearances a year to places where he can reach kids at risk; juvenile halls, detention centers, boys/girls clubs, schools. Anywhere he can get across his message that "we all have a choice" about where life takes us.Olmos stresses the importance of education, the risks of gang life and tries to promote the notion of taking responsibility for one's own actions and one's own happiness in life. Using his own "disadvantaged background" as an example (he grew up in East Los Angeles, infamous for its gang problems), he tells the kids, "If I can do it, so can you". And he tries to point them in a positive direction. He has served as an ambassador for UNICEF and has received numerous accolades for his activism. He will long be remembered for getting out in the thick of the Los Angeles Riots of 1992 with his broom: one calm, reasonable presence in the midst of chaos and gunfire. Edward James Olmos was married to actress Lorraine Bracco. Between them they have 6 children, ages 10 - 25.