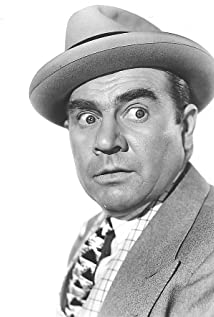 Edward S. Brophy was born on February 27, 1895 in New York City and educated at the University of Virginia. He became a bit and small-part in the movies starting in 1919, but switched to behind-the-scenes work for job security, though he continued appearing in small parts. While serving as a property master for Buster Keaton's production unit at Metro-Goldwyn-Mayer, Brophy appeared in a memorable sequence in Keaton's classic The Cameraman (1928), in which Buster and Brophy both try to undress simultaneously in a tiny wardrobe room. Keaton cast Brophy in larger parts in two of his talkies, and by 1934, Brophy abandoned the production end of the movies altogether and was acting full-time.Possessed of a chubby, bald-headed face with pop-eyes, and blessed with (for a comic) a high-pitched voice, Brophy appeared in scores of comic roles. He also played straight dramatic parts, but was less effective in them. Typical of his work was his memorable turn providing comic relief in the small supporting role of the Marine in Manila who adopts the dog "Tripoli" in Howard Hawks' war propaganda masterpiece Air Force (1943).In the 1950s, Brophy began taking fewer roles. His last role was in director John Ford's Western Two Rode Together (1961), during the production of which, he died on May 27, 1960 in Pacific Palisades, California. He will always be remembered to film-lovers as the voice of Timothy Mouse in Walt Disney's classic 1941 cartoon Dumbo (1941).

It Happened on Fifth Avenue