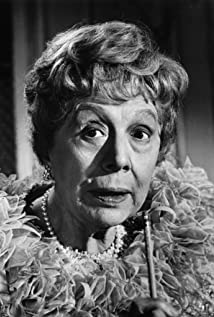 Edith Evans was the greatest actress on the English stage in the 20th century, treading the boards for over half-a-century. She made her professional stage debut in 1912 and excelled in both classic and modern roles in the West End of London and on Broadway, as well as the Shakespeare Memorial Theatre at Stratford-upon-Avon and the Old Vic. She was made a Dame Commander of the Most Excellent Order of the British Empire (the equivalent of a knighthood) in 1946.Laurence Olivier has written in his memoirs that Evans's power on stage began to falter in the early 1960s, as her memory dimmed with age. It was about this time that she made a transition to the screen, after generally ignoring the medium for the first two decades of talking films. (After making her movie debut in 1915, Evans appeared in no films at all between 1916 and 1949, when she came back to the screen in support of a young Richard Burton in Emlyn Williams's Woman of Dolwyn (1949).) In the 1950s, she had made memorable appearances in film in The Queen of Spades (1949), The Importance of Being Earnest (1952), Fred Zinnemann's The Nun's Story (1959) (1959), and in Tony Richardson's film version of John Osborne's Look Back in Anger (1959), but it was her performance as Miss Western in Richardson's Oscar-winning Best Picture Tom Jones (1963) that established her as a major film presence. She won her first Oscar nomination for "Tom Jones", and her second the following year for The Chalk Garden (1964). She won a Golden Globe and the New York Film Critics Circle Award as Best Actress for her performance as the frightened old lady in Bryan Forbes's The Whisperers (1967). The role also brought her a 1967 Oscar nomination for Best Actress, though she lost the trophy to Katharine Hepburn, who had recently lost her long-time lover Spencer Tracy and rode a wave of Hollywood sentiment to victory.Dame Edith Evans continued to act in films until her death, though the material generally was beneath her great talent. She died on October 14, 1976, at the age of 88.

The Slipper and the Rose: The Story of Cinderella

Prudence and the Pill