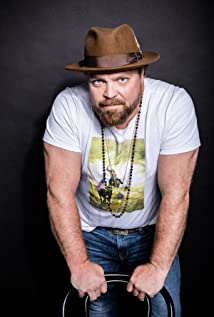 From the moment Drew Powell was born, he was getting peoples attention. The actor who went on to play a young "Hoss Cartwright" started out as a real life Hoss setting a record at the Indiana hospital weighing in at more than 11 lbs.Drew grew up in Lebanon, Indiana outside of Indianapolis and was singing and acting throughout his formative years. He then went to DePauw University, where he majored in English Literature and was a Media Fellow, an honors program in media studies. While in college, Drew was active in the theatre department and also wrote and performed in several campus television shows and short films.Upon graduation, Drew moved to Los Angeles and appeared in his first television show, "Malcolm in the Middle" a few months later. He recurred as "Cadet Drew" for two seasons on "Malcolm". Drew then went on to play the afore mentioned Hoss Cartwright in a prequel to "Bonanza" called "The Ponderosa". Shooting in rural Australia, Drew met his wife, a make-up artist on the show.Drew's feature films include Starship Troopers 2, The Marine, Mexican Sunrise and 1408 with John Cusack and Samuel L. Jackson. In between, he has done several national commercials and has guest starred on shows such as Popular, CSI and Monk. Drew recently received rave reviews for his portrayal of Paul, the lonely troubadour in a monologue show "Skirts and Flirts" at the Hudson Mainstage Theatre in LA. Music has always been a passion for Drew and he plays the guitar and sings whenever he can.His first television role was as Cadet Drew on Fox's Malcolm in the Middle. He appeared in thirteen episodes. Soon after, he portrayed Hoss Cartwright on the series The Ponderosa, a prequel to Bonanza which premiered in 2001 on PAX. Powell has had guest appearances on numerous television shows including: Ray Donovan, Modern Family, True Blood, House, Leverage, ER, and Grey's Anatomy. He also recurred as FBI Agent Reede Smith, one of the 7 Red John suspects on The Mentalist.Drew portrayed Bic in the 2011 film Straw Dogs, a remake of the 1971 film of the same name. The remake was directed by Rod Lurie and starred James Marsden, Kate Bosworth, and Alexander Skarsgård. It was released September 16, 2011.A legal resident of Australia and England, Drew lives with his wife Veronica in Los Angeles and Melbourne.