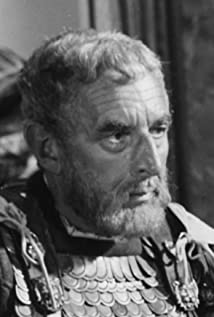 Distinguished character villain Douglass (R.) Dumbrille, whose distinctive stern features, beady eyes, tidy mustache, prominent hook nose and suave, cultivated presence graced scores of talking films, was born on October 13, 1889, in Hamilton, Ontario, Canada. He was first employed as a bank clerk in his home town but caught the acting bug and subsequently left his position to pursue work in various stock companies in the States.After appearing in a production of "Rain" in 1923, Dumbrille made his Broadway debut in 1924 as Banquo in "Macbeth" at the 48th Street Theatre. Throughout the 1920s and early 1930s he was a moderate fixture on the Great White Way, appearing in dramas ("The Call of Life" (1925) with Eva Le Gallienne, "Chinese O'Neill" (1929), "As You Desire Me" (1931)), romantic comedies ("Joseph" (1930), "Child of Manhattan" (1932)) and musical operettas ("Princess Flavia" (1925), "Princess Charming" (1930)). He also appeared in Florenz Ziegfeld Jr.'s 1928 musical production of "The Three Musketeers", portraying Athos alongside Dennis King's D'Artagnan, with Rudolf Friml providing the music. A decade later he portrayed Athos once again, this time in a film version (The Three Musketeers (1939)).On the silent screen he portrayed Thomas Jefferson in the short historical film The Declaration of Independence (1924), but did not return to film until 1931, when he began unleashing a number of sneering, oily villains on the viewing public. His first film job was to harass sea captain Gary Cooper in His Woman (1931). From there he proved a slick nemesis to a number of stars, both male and female: Marion Davies with his leering moneybags in Blondie of the Follies (1932); Pat O'Brien with his cruel-minded chain gang warden in Laughter in Hell (1933); Barbara Stanwyck as her unctuous love patsy in Baby Face (1933); James Cagney as gangster Spade Maddock in Lady Killer (1933); Warner Baxter and Myrna Loy as a mobster involved in horse race fixing in Broadway Bill (1934) and, most notoriously, Gary Cooper and Franchot Tone, both of whom he induces fingernail torture ("We have ways of making men talk!") as the sinister, turban-wearing rebel leader Mohammed Khan in The Lives of a Bengal Lancer (1935).Dumbrille was also a great pompous foil in comedy slapstick - harassing everybody from The Marx Brothers, Bud Abbott and Lou Costello to Bob Hope. He returned to the musical operetta fold as well on film and played a nuisance to Jeanette MacDonald in three of her films. Seen everywhere, both billed and unbilled, he played sheriffs who went bad in westerns, red-herring suspects or victims who deserved their fate in murder mysteries and corrupters of the legal system in political dramas.The man everybody loved to hate on film softened his image a bit with old age, playing a number of non-plussed executive or officious types in films and TV comedy. Finding a stream of TV work in the 1950s and early 1960s (including The George Burns and Gracie Allen Show (1950), The Untouchables (1959), Perry Mason (1957), Laramie (1959). Petticoat Junction (1963)), Dumbrille's final role was at age 76 as a doctor in a TV episode of Batman (1966) in 1966.His long-time first wife, Jessie Lawson, died in 1957, leaving him two sons, John and Douglas Murray. Dumbrille had more than a few Hollywood tongues wagging when, at age 70, he married Patricia Mowbray, the 28-year-old daughter of his good friend, character actor Alan Mowbray. The marriage was a lasting one, however, and she was among his survivors when he passed away several years later from a heart attack on April 2, 1974. Dumbrille was buried at Pierce Brothers Valhalla Memorial Park Cemetery in North Hollywood, California.

What a Way to Go!

Davy Crockett and the River Pirates