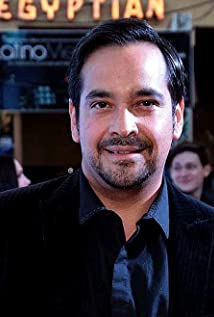 Dominic Flores is a film and television actor from Dana Point California. Born and raised in the beach cities of Southern California, Dominic's mother was a school teacher and his father was a famous Latin trumpet player from Bolivia in South America. Dominic toured and played a Latin hip hop fusion with his father until 1996 when he began training to be a professional actor at the prestigious South Coast Repertory theater in Costa Mesa. After being cast on both their main stage and second stage productions he moved to Los Angeles and was cast on his first audition in the film "Starmaps" the debut feature from Miguel Arteta which went on to much success at the Sundance film festival where it was purchased and theatrically released from Fox Searchlight in 1997. Dominic did not return to acting until 2007 and he steadily began working in small parts on hit network TV shows like, House, Sons of Anarchy,My Name is Earl, and New Girl as well as roles in the films Peep World, My Name is Khan, and Rampart with Woody Harrelson and directed by Oren Moverman. in 2014 Dominic was cast in his first starring role in a studio film playing the corrupt politician Hugo Barco opposite Sandra Bullock in her new film "Our Brand is Crisis". Produced by George Clooney and his Smokehouse productions and released by Warner Brothers in 2015 OBIC tells the true story of American politicians hired to elect an undesired candidate in Bolivia and the consequences of their actions. David Gordon Green directs and Billy Bob Thornton, Zoe Kazan, and Anthony Mackie costar. Dominic is married to the producer Kristen Ridgway Flores and they have three children together. in 2014 Dominic and Kristen produced the documentary "My Uncle is the Green River Killer" for the A&E/LMN network. Dominic and Kristen are the founders of the Feel Good Film Festival, a 3 day non profit film festival in Hollywood designed to showcase films that make you feel better than you did before you sat down. It debuted at the Egyptian theater to much success in 2008 and continued until 2012.