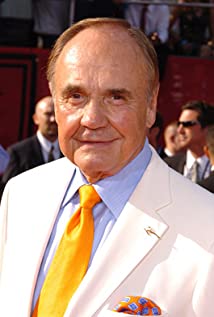 A native of suburban Detroit, Michigan, Dick Enberg grew up near Pontiac, one of Detroit's suburbs. Upon graduating from high school Enberg went to college first at Central Michigan University and then at Indiana University. After graduating from college Dick moved to Los Angeles to become an assistant baseball coach at Northridge State University (Cal State-Northridge).Shortly thereafter Dick became a sportscaster. At first Enberg called local minor league sports, but then became the play-by-play man for the (then) Los Angeles Rams, the California (now Anaheim) Angels, and the UCLA Bruins. He first earned national fame on the cartoon Where's Huddles? (1970), then earned a breakthrough role as the host of Sports Challenge (1971). His NBC connection began with Baffle (1973), and, upon the cancellation of Three for the Money (1975) became a full-time sportscaster for NBC, calling NFL games that year. Eventually he rose to become NBC's top play-by-play announcer, calling during the late '70s, the '80s and '90s such sports as college and NBA basketball; golf, including many U.S. Opens in the '90s; tennis, including Wimbledon and the French Open; baseball; and, of course, NFL football, including 8 Super Bowls, the last of which also was NBC's final NFL game and was held in San Diego, California, where he currently resides. Months after NBC lost the NFL, Enberg received his star on the Hollywood Walk of Fame for his work as a sportscaster. After NBC lost NFL rights Enberg was seen rarely on the Peacock web, calling only a few sports events, including college basketball and tennis. In 1999 he was replaced on NBC's golf coverage by Dan Hicks , and at years's end left NBC and joined CBS, not only to resume NFL football, but also to become of the Eye web's college basketball announcers. In addition, he now calls the U.S. Open tennis tournament for CBS.