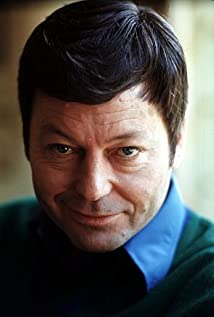 Jackson DeForest Kelley was born on January 20, 1920 in Toccoa, Georgia, to Clora (Casey) and Ernest David Kelley. He graduated from high school at age 16 and went on to sing at the Baptist church where his father was a minister. At age 17, he made his first trip outside the state to visit an uncle in Long Beach, California. He intended to stay for two weeks but ended up staying a year. Upon returning home, he told his parents he was moving to California to become an actor. His mother encouraged him but the idea did not go over well with his father. In California, Kelley was spotted by a Paramount talent scout while working on a United States Navy training film. He became a reliable character actor (often in Westerns in which he often played the villain), but hit the big time when he was offered the role of the somewhat irascible Dr. Leonard "Bones" McCoy on the television series Star Trek: The Original Series (1966). He later reprised his role for a string of successful Star Trek films: Star Trek (1979), Star Trek II: The Wrath of Khan (1982), Star Trek III: The Search for Spock (1984), Star Trek IV: The Voyage Home (1986), Star Trek V: The Final Frontier (1989), and Star Trek VI: The Undiscovered Country (1991). DeForest Kelley died at age 79 of stomach cancer in his home in Woodland Hills, Los Angeles on June 11, 1999.

Night of the Lepus

The Bull of the West

Marriage on the Rocks