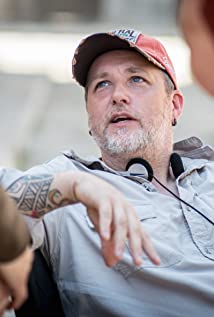 In 1977, aged 8, Declan was taken to the cinema for the first time. He queued for hours. Once eventually inside, he began, as he thought you were supposed to, to run up and down the aisles playing airplanes with a total stranger. The film started and as the Star Destroyer chased the Rebel blockade-runner across the screen, he became transfixed, mesmerized by the spectacle. Star Wars was his introduction into cinema.Poor Declan! Intellectually we must admit, he was not of much importance. He never said a brilliant or even ill-natured thing in his life. Ultimately he became nothing, a delightful, ineffectual young man with a perfect profile and no profession. Obviously, realizing his own shortcomings he made the natural and seamless transition into directing.After a much deserved divorce, and with no qualifications, Declan returned to education at the tender age of 26 by going to drama school. However, this only convinced him the world wasn't yet ready for his unique anti-acting style, so after this brief incarceration and whilst still remaining painfully under educated and overdressed, he graced his presence upon Bournemouth Film School.Earning a place on the prestigious The Fuji Film Scholarship allowed Declan to make his first narrative film; A Frozen Chicken Saves the Soaps Day - the film was honored to be invited to many of the major European film festivals. He is also rumored to have directed the satirical homage 'Potemkin: The Runner's Cut', starring Charles Dance, which also became entrenched in the International festival circuit.A commission to co-pen two historically drama epics kept Declan in Liquorice Allsorts. Brittania (about Boadicea) and Conqueror (unsurprisingly about William the Conqueror).With his dirty baseball cap at a jaunty angle, Declan took a directing secondment into network television drama on UK cop show The Bill - which resulted in a short-listing in the New Director (Fiction) category at the BAFTA Television Craft Awards which undoubtedly helped Declan become a regular director on several prime-time continuing dramas across all UK terrestrial networks.He then moved into 'Single Dramas' with feature length psychological thriller Wire in the Blood and an adaptation of an Andy McNab novella The Grey Man. BBC's flagship Robin Hood fulfilled his schoolboy mentality before he exchanged (the now VERY dirty) baseball cap for a stetson and went hunting serial killers in Texas with Prayer of the Bone. On the return from distant shores he began cohabiting with vampires, werewolves and ghosts in the pilot of the hit show Being Human and battling dragons and Greek mythological monsters in Merlin and Atlantis.The invention of the spell-checker eventually seduced Declan back into writing - resulting in the whiskey soaked revenge thriller, Broken Cove, (Black List 2014). Despite the typos, the script was also a Nicholl Scholarship quarter finalist. His follow-up script, Numb, was a Final Draft Big Break quarter finalist and Page Finalist (2015). In 2018 he was nominated for an Emmy for directing on Free Rein - which is obviously better than not being nominated.

Wire in the Blood