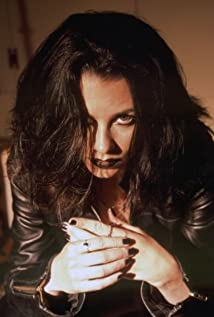 Debbie Rochon grew up in British Columbia, Canada. She was a child of the streets and victim of much abuse until she accidentally ended up in a featured extra role in Paramount's Ladies and Gentlemen, the Fabulous Stains (1982)!The event changed her life, and she saved enough money to move to New York City and study acting. After many years working with numerous theater companies in off-Broadway plays, she started to land small roles in films. Spike Lee's editor Barry Alexander Brown cast her in a featured role in his first directing effort, Lonely in America (1990). Soon the parts grew bigger and bigger and primarily fell in the fear flick genre.After spending three months as a featured extra on the 1980 filmed Ladies and Gentlemen, the Fabulous Stains (1982) movie set, Debbie was still a fledgling actor but took on the female lead in the Leonard Melfi one act play Ferryboat. It was indeed synchronicity for Debbie to cut her acting teeth on a play about the Staten Island Ferry, by 1984 she moved from her home town of Vancouver, B.C. to New York City. For the rest of the 1980s she spent most of her time studying acting at Michael Chekhov Studios under Ted Pugh, Lee Strasberg Institute under Penelope Allen, NYC's Chicago City Limits under David Regal and H.B. Studios under William Hickey, Carol Rosenfeld and Uta Hagen. Debbie spent all her time working in plays on Theatre Row in NYC, mostly in new works by playwrights and shooting NYU thesis films with burgeoning filmmakers. By 1988 she started to land small roles with grind-house indie filmmakers Roberta Findlay and Chuck Vincent. She made two films with each film maker by 1989, in both cases they would be the last, or close to very last, films both directors would helm before retiring. By the early 1990s, Debbie was working with multiple theatre companies in NYC including The Tribeca Lab where she played multiple characters in Stephen DiLauro play The Secret Warhol Rituals. In 1993 Debbie began her career in radio co-producing and co-hosting Oblique Strategies on the terrestrial channel WBAI. 1994 was the beginning for Debbie to land lead roles in film. Abducted II: The Reunion (1995) would be the first, and in 1995 she co-stared in her first Troma produced film Tromeo and Juliet (1996) co-directed by James Gunn and Lloyd Kaufman. This would also be the year Debbie would be given her first writing column which appeared in The Job Bob Report, published by John Bloom. She would also pen for numerous genre publications including The Phantom of the Movies' Videoscope magazine which she still writes for today. Of the multiple roles she would portray by decade's end it would be Hellblock 13 (1999), co-staring Gunnar Hansen, that would begin the wheels turning for a new type of role she would soon be known for. During the 1996-1998-time frame Debbie would co-produce and co-host Illumination Gallery for the internet's first on-line radio station Pseudo Radio. In 2000 director Jon Keeyes cast Debbie in the now cult classic American Nightmare (2002) which garnered much acclaim with legit reviewers and audiences alike. Her role as Jane Toppan would solidify her as a go-to actor for roles of the off-kilter and intense kind. By 2002 Debbie began working for Full Moon Entertainment, starring in four feature films with the company. She continued to write for genre publications and contributed chapters to horror themed books. In 2005 Debbie joined forces with what was then known as Scream TV. The company bought Fangoria magazine and Debbie began producing short documentaries including Fangoria Presents: Slither Behind the Scenes (2006). In 2006 they launched Fangoria Radio for Sirius/XM where she co-produced and co-hosted the show with Twisted Sister front-man Dee Snider until 2010. The following year Debbie was granted her own column in the magazine called Diary of the Deb, the first column written by a woman for the publication, it was nominated for three Rondo Hatton Classic Horror Awards for best column, winning the esteemed statue in 2014. During this decade Debbie also gave critically acclaimed turns in works inspired by some of her favorite classical writers; Tales of Poe (2014) (Edgar Allan Poe), Mark of the Beast (2012) (Rudyard Kipling) and Colour from the Dark (2008) (H.P. Lovecraft).Debbie appeared on the VH1 reality TV show Scream Queens: Episode #2.4 (2010) as a guest judge in 2010. In 2012 she served, with Mira Sorvino, Gabrielle Miller, Tamar Simon Hoffs and Lana Morgan, as part of the first all-female jury at the Oldenburg International Film Festival in Germany. The same year Debbie had her directorial debut with the extreme body-horror film Model Hunger (2016). ETonline.com hailed Debbie as one of the "40 Top Scream Queens of the Past 40 Years" in 2018. Debbie's current writing column, Debbie Rochon's Bloody Underground, appears in the Italian published magazine Asylum. Debbie continues to act in feature films, is writing her book and prepares for her so

Terror in the Woods