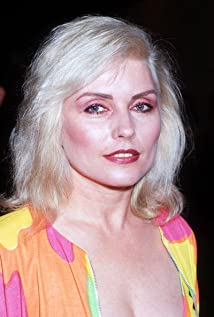 Deborah Harry was born Angela Trimble on July 1, 1945 in Miami, Florida. At three months, she was adopted by Catherine (Peters) and Richard Smith Harry, and was raised in Hawthorne, New Jersey. In the 1960s, she worked as a Playboy Bunny and hung out at Max's Kansas City, a famous Warhol-inhabited nightspot. Her professional singing career started in 1968 with a folk band called The Wind in the Willows. She sang backup on their first (and only) album. The band broke up shortly after failing to achieve commercial success or critical acclaim. In 1973, she met Chris Stein, who became her longtime boyfriend. They created Blondie in 1974 after they both were in the Stilletoes, a theatrical "girl group" band. Blondie struggled for a few years, then went on to be one of the most successful bands of the late 1970s and early 1980s, but the group broke up in 1982.Harry has released five solo albums, acted in several movies and television series and a few commercials (Gloria Vanderbilt Jeans, Sara Lee, Revlon). She has done many benefit shows in support of AIDS charities, a Broadway show ("Teaneck Tanzi"), poetry readings, and been one of the most notorious characters in the New York downtown scene. As of 1995, she was doing shows in the United States and Europe with the Jazz Passengers and Elvis Costello, filming two new movies (Heavy (1995) with Liv Tyler and Evan Dando and Drop Dead Rock (1995) with Adam Ant) and topping the dance charts with two newly remixed Blondie singles ("Rapture" and "Atomic"). Several Blondie tribute albums have been released and a Blondie remix album titled "Remixed, Remade, Remodeled" came out in 1995.

Mapplethorpe: Look at the Pictures

Blondie's New York and the Making of Parallel Lines

Quiet Riot: Well Now You're Here, There's No Way Back

How Hip Hop Changed the World