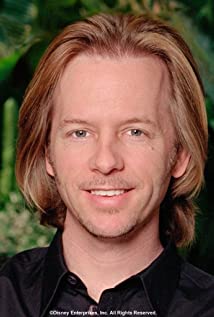 Adept at playing comic brat extraordinaires both on film and TV, David Spade was born on July 22, 1964, in Birmingham, Michigan, the youngest of three brothers. He is the son of Judith J. (Meek), a writer and editor, and Wayne M. Spade, a sales rep, and is of German, English, Irish, and Scottish descent. Raised in both Scottsdale (from age four) and Casa Grande, Arizona, he graduated with a degree in business from Arizona State University in 1986. A natural prankster most of his life, Spade was pushed immediately into stand-up comedy by friends and appeared in nightclubs and college campuses all over the country.A casting agent saw his routine at "The Improv" in Los Angeles and offered him a mischievous role in the film Police Academy 4: Citizens on Patrol (1987). In 1990, the diminutive, flaxen-haired comedian finally hit the big time as a regular cast member and writer on Saturday Night Live (1975). Slow at first in gaining acceptance on the show, his razor-sharp sarcasm eventually caught on by his second season, when he played a number of smart-aleck characters in a variety of sketches, including a highly disinterested airline steward who bids each passenger adieu with a very sardonic "buh-bye" and an irritating receptionist for Dick Clark Productions who greets each huge celebrity with an unknowing "And you are . . . ?" A master of the putdown, Spade's "Hollywood Minute" reporter also took cynical advantage of tabloid-worthy stars. Spade impersonated such luminaries as Michael J. Fox, Kurt Cobain and Tom Petty during his tenure.Following his SNL departure after six years, he spun off into a slapstick movie career, most noticeably as the scrawny, taciturn foil to SNL's wild and crazy big boy Chris Farley in Tommy Boy (1995) and Black Sheep (1996). The teaming of this unlikely but funny pair ended with Farley's death from a 1997 drug overdose. Since then, Spade has appeared in his own lukewarm vehicles, including Joe Dirt (2001) and Dickie Roberts: Former Child Star (2003). More recently he teamed with former SNL member Rob Schneider on the film The Benchwarmers (2006). Television has been more accepting over the years, with Spade earning an Emmy nomination as the droll, skirt-chasing secretary Dennis Finch on Just Shoot Me! (1997) and filling in after the untimely death of John Ritter on ABC's 8 Simple Rules (2002) as Katey Sagal's unprincipled nephew.Into the millennium, David was the star of the Comedy Central show The Showbiz Show with David Spade (2005) in 2005 wherein he more or less resurrected his obnoxious, razor-tongued gossipmonger from the old "Hollywood Minute" put-down segment on SNL, as well as co-starring in the adult-oriented ensemble sitcom Rules of Engagement (2007).More recent comic film vehicles include The Benchwarmers (2006), The Do-Over (2016) alongside Adam Sandler; Father of the Year (2018); and The Wrong Missy (2020), along with cocky supporting roles in Entourage (2015) (as himself); the Adam Sandler vehicles Jack and Jill (2011), Grown Ups (2010), Grown Ups 2 (2013) and The Ridiculous 6 (2015); Sandy Wexler (2017); a voice in the animated feature Hotel Transylvania (2012) and its sequel Hotel Transylvania 3: Summer Vacation (2018); Mad Families (2017) (also-co-wrote); and the rare dramatic thriller Warning Shot (2018). He also played recurring parts on the TV programs Carpet Bros (2008), Love (2016) and The Mayor (2017).

Father of the Year