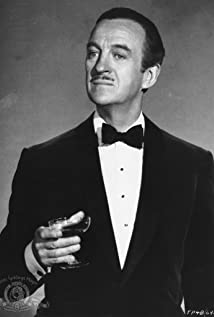 James David Graham Niven was born on the feast day of St David. Following Niven senior's death at Turkey's infamous Suvla Bay, Niven's mother went on to marry his biological father, the Conservative politician Sir Thomas Comyn-Platt, but it was years before the true father/son relationship was acknowledged.David Niven attended Stowe School and Sandhurst Military Academy and served for two years in Malta with the Highland Light Infantry. At the outbreak of World War II, although a top-line star, he re-joined the army (Rifle Brigade). He did agreed to appear in two films during the war, both of strong propaganda value (Spitfire (1942) and The Way Ahead (1944)).Despite six years' virtual absence from the screen, he came in second in the 1945 Popularity Poll of British film stars. Upon his return to Hollywood after the war he was made a Legionnaire of the Order of Merit (the highest U.S. order that can be awarded to a non-citizen), which was presented to Lt. Col. Niven by Gen. Dwight D. Eisenhower.

Curse of the Pink Panther

A Nightingale Sang in Berkeley Square

No Deposit, No Return