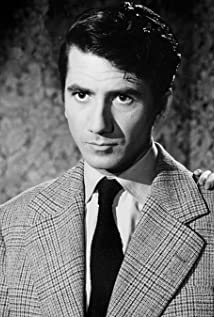 Sensitive, boyishly handsome, dark-haired Gallic lead and character actor Daniel Gelin did not have an easy personal life but was warmly embraced as a talented star who appeared to fine advantage for such legendary directors as Max Ophüls, Louis Malle, Jean Cocteau, Alfred Hitchcock, and Claude Lelouch.Born Daniel Yves Alfred Gelin in Angers, France, on May 19, 1921, he left home at age 16 to take dramatic arts classes and trained at the Cours Simon in Paris, later studying at the Paris Conservatoire with Louis Jouvet his mentor. He made his first film appearance in Miquette (1940) and for several years played extra or bit parts in French films.His rebellious bohemian nature served him well in films, if not his private life. Adept at both light comedy and heavy drama, Gelin moved into leading roles in 1949 and went on to mesmerize audiences in such films as Rendezvous in July (1949), Edward and Caroline (1951), Dirty Hands (1951), Le Plaisir (1952), Rue de l'Estrapade (1953), Young Love (1951), Napoleon (1955) (title role), The Man Who Knew Too Much (1956), Testament of Orpheus (1960) and many more.Numerous starring/co-starring roles in primarily French films followed, a healthy mixture of farce and drama. These included Shadows of Adultery (1961), The Boy and the Ball and the Hole in the Wall (1965), Line of Demarcation (1966), Living it Up (1966), Witness Out of Hell (1966), The Truce (1968), Sadistic Hallucinations (1969), The Servant (1970), Far from Dallas (1972), Dialogues of Exiles (1975), The Honorable Society (1978) and The Children (1985). His final films would be in The Tenors (1993), Des feux mal éteints (1994), Runaways (1995) and Les Bidochon (1996). Gelin's last few years were spent on TV with projects including roles on Adventures of Smoke Bellew (1996), Les marmottes (1998) and Madame le proviseur (1994).Despite his enviable resume (150 films), It's generally considered that Gelin professional career was compromised by a turbulent, unhappy life off screen. Gelin lived an emotionally up-and-down rollercoaster life pocked with stormy relationships, severe depression and suicide attempts. A lengthy battle with alcohol and drugs quickly hardened his initially boyish features. One child son, Pascal, died tragically in 1957 at the age of 14 months when he accidentally swallowed pills. Another son, actor/producer Xavier Gélin, lost his battle with cancer in 1999.Gelin was married three times, including his first to actress Danièle Delorme. He had six children in all. One daughter, actress Maria Schneider was the product of his liaison with French model Christine Marie Schneider, whom he never married. Another daughter was actress Fiona Gélin. Gélin was a writer as well, and penned a number of poetry poems, memoirs and even a manual on gardening. He died in Paris on November 29, 2002, at the age 81 of kidney failure.

That Night in Varennes