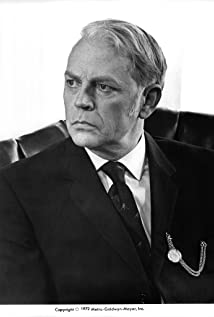 Irish-born Dan O'Herlihy decided not to follow in his father's footsteps, forsaking the life of an architect in favour of the acting profession. The tall, distinguished-looking university graduate boasted a rich, resonant voice, which enabled him to easily find work in radio plays, as well on the stage. He first came to note as a small part actor with the Gate and Abbey Theatre Players, on occasion putting his architectural qualifications to use as a set designer. His first leading role was in Sean O'Casey's play 'Red Roses for Me' in 1944. During one of his performances in Dublin, he was spotted by the director Carol Reed and cast as an IRA terrorist in Odd Man Out (1947). This, and another London-produced film, Hungry Hill (1947), resulted in good critical notices , prompting another genial filmmaker, Orson Welles, to cast O'Herlihy in the role of Macduff for his Mercury/Republic production of Macbeth (1948). While this enterprise was far from successful, O'Herlihy's rugged, bearded appearance for the Scottish play sufficiently impressed Luis Buñuel to cast him in the titular role of Robinson Crusoe (1954).Until the arrival of 'Friday' - the only other featured character - this definitive version of Daniel Defoe's shipwrecked 17th century mariner was a tour-de-force one man show, a compelling, wordless portrayal of agonising solitude. However, since the Mexican production was considered merely a B-movie in Hollywood, O'Herlihy was forced to invest some of his own money to have the film exhibited in Los Angeles. While he was rewarded with an Oscar nomination, few worthy job offers came his way. For the remainder of the decade, he worked under short-term contracts as a character actor (often billed as 'Daniel O'Herlihy') for Universal and 20th Century Fox, typically cast in costume dramas like The Black Shield of Falworth (1954), The Purple Mask (1955) and The Virgin Queen (1955). When movie roles became scarce, he branched out into anthology television, eventually becoming a much sought-after guest star on popular prime time shows like The Untouchables (1959), Bonanza (1959) and The Man from U.N.C.L.E. (1964). Work on radio shows, like 'Johnny Dollar', 'Suspense' and 'Lux Radio Theatre', also continued to provide him with a steady source of income.From the mid-1960's, he was afforded several better film opportunities: first, in a memorable dual role as the sinister, voyeuristic Dr. Caligari, and the handsome psychiatrist treating repressed mental patient Jane Lindstrom (Glynis Johns), in Robert Bloch's off-beat psycho-thriller, The Cabinet of Caligari (1962). Secondly, giving an absolutely mesmerizing performance, as an anguished Air Force general contemplating orders to drop a hydrogen bomb over New York, in Sidney Lumet's gripping anti-war drama Fail Safe (1964). He was also, among later big screen appearances, one of many name actors in the star-studded military epic Waterloo (1970) (as Napoleon's Marshal Ney); unrecognisable in make-up as a reptilian alien in the 'Star Wars' clone The Last Starfighter (1984); as irredeemable villains in Halloween III: Season of the Witch (1982) and RoboCop (1987); and as the inscrutable Andrew Packard in Twin Peaks (1990) on TV. O'Herlihy continued to alternate film work with acting on stage in Los Angeles and at the Abbey Theater. He died in February 2005 at the age of 85, leaving his papers to the care of the University College Dublin, from where he had obtained his degree in architecture way back in 1945.