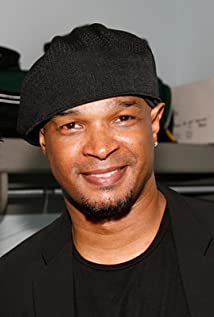 A tall (6'2"), sly, cueball-domed comedian of film and television satire, Damon Wayans hit outrageous 90's TV stardom playing various wise guys and streetwise slick characters on older brother Keenen Ivory Wayans' landmark, black-oriented TV sketch comedy In Living Color (1990). The show was pretty much a family act and it made Damon a breakout comedy star. This, in turn, would lead to many of his own popular film comedy vehicles.Born on September 4, 1960, in New York City, Wayans was the third of ten children of Elvira Alethia (Green), a social worker and singer, and Howell Wayans, a supermarket manager. The children grew up humbly in the Fulton Housing Projects and Damon began zeroing in on his innate comedic skills while still a child by conjuring up weird characters. Ostracized by other children due to a severe physical disability (club foot), humor played a strong part in helping Damon handle a severely painful and debilitating childhood. He wore leg braces, orthopedic shoes and endured numerous surgeries before the affliction could be corrected.Dropping out of high school in the ninth grade, he worked various jobs (mail clerk, etc.) until following older brother Keenen out to Hollywood to seek comedy fame and fortune. Doing the typical L.A. stand-up scene starting in 1982, he toured on the national comedy club circuits until earning a regular featured slot on Saturday Night Live (1975) for one season (1985-1986). On the big screen, he nabbed a few bit parts in films that showcased Hollywood's top comedians, including Eddie Murphy in Beverly Hills Cop (1984), his movie debut, and Steve Martin in Roxanne (1987). He also appeared briefly in brother Keenen's film spoofs Hollywood Shuffle (1987) and I'm Gonna Git You Sucka (1988).Damon gained major notice as an alien alongside Jeff Goldblum and future co-star Jim Carrey in the wild and woolly film Earth Girls Are Easy (1988), as well as in various supporting roles that included Punchline (1988) with Tom Hanks and the grim police drama Colors (1988) with Sean Penn. Stardom came with TV, however, and his participation in brother Keenan's fast-paced groundbreaking show that truly pushed the limits. It gave Damon a brilliant showcase as both actor and special material writer and he broke out early among the talented ensemble players with his eclectic gallery of characters that often bordered on raunch: Homey the Clown, the disabled Handiman and the outrageously gay film critic Blaine Edwards from the "Men on Film" skits. The talented ensemble would include siblings Kim Wayans, Shawn Wayans and Marlon Wayans. Creative control and financial issues, especially content censoring, led to Keenan abruptly leaving the show in 1992, followed by Damon and his kin within a year.From there Damon pursued film and TV solo stardom. For the next decade and a half, Damon became his own "Man on Film." He was Bruce Willis' partner in the noticeably violent crime thriller The Last Boy Scout (1991); wrote, executive-produced and starred as a former conman trying to mend his ways in Mo' Money (1992), which also featured younger brother Marlon Wayans; expanded his "In Living Color" handicapped superhero character Handiman into feature-length form with Blankman (1994); played an in-your-face drill sergeant in the aptly titled Major Payne (1995); co-starred with Adam Sandler as a policeman bringing in a petty crook (Adam Sandler) in the action comedy Bulletproof (1996); joined in the basketball-themed Celtic Pride (1996); and stretched his acting muscles in Spike Lee's comedy-drama Bamboozled (2000). He was also executive producer on Waynehead (1996), a Saturday morning animated show based on his childhood that featured the voices of younger siblings Kim Wayans, Marlon Wayans and Shawn Wayans.Although his strongest suit is still in stand-up (he has starred in several HBO comedy specials), Damon went back to steady television employment as star and executive producer of the sitcom My Wife and Kids (2001). Following the demise of that series, he also wrote, produced, directed and starred in the dramatic film Behind the Smile (2006) in which he played a green Cleveland stand-up comic hoping to make it big in Los Angeles. He also attempted to follow brother Keenan by creating, writing and appearing in a TV sketch comedy show entitled The Underground (2006), which involved second-generation Wayans family. It failed to catch on, however, and was cancelled after 11 episodes.In recent years he has refocused on TV guest work, returning to the series format, however, with a starring role as Detective Roger Murtaugh on the offbeat comedy-drama Lethal Weapon (2016), based on the film series of the same name. Divorced from his wife Lisa (1984-2000), he is the father of four, including actor Damon Wayans Jr..

Farce of the Penguins

Back in Step with the Fly Girls

My Wife and Kids