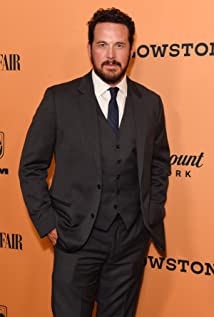 Cole Hauser was born in Santa Barbara, California. He is the son of Cass Warner, who founded a film production company (Warner Sisters), and Wings Hauser, an actor. His grandfathers were screenwriters Dwight Hauser and Milton Sperling, and his maternal great-grandfather was film mogul Harry M. Warner, of Warner Bros. His father is of German, Irish, and Belgian (Walloon) descent, and his mother is from a Jewish family (from Austria, Russia, and Poland). He grew up in California, Oregon and Florida.Hauser has had a long and impressive career in acting. He made his big screen debut in "School Ties" where many other then up and coming actors had their starts. He next went on to star in Richard Linklater's Cult Classic "Dazed and Confused." Other feature credits include "Tigerland," for which Cole received an Independent Spirit Award nomination, "White Oleander" for which he received a Movieline breakthrough performance also, "Hart's War," "Tears of the Sun," "Higher Learning," and "Too Fast, Too Furious," to name a few.In 2014 Hauser will be seen in two anticipated projects. This spring he can be seen opposite Johnny Depp in the Warner Bros release of Transcendence (2014). Immediately following he will star in DirecTV's original drama "Rogue" opposite Thandie Newton. The show, in its second season has been a big draw for the network. Earlier this year he was seen in Antoine Fuqua's Olympus Has Fallen (2013), an action ensemble which included Aaron Eckhart, Gerald Butler and Morgan Freeman.Hauser lives outside of Los Angeles with his wife, photographer Cynthia Daniel, and three children.

A Good Day to Die Hard