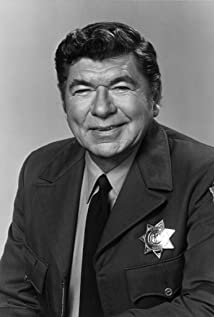 Broad-shouldered and beefy Claude Akins had wavy black hair, a deep booming voice and was equally adept at playing sneering cowardly villains as he was at portraying hard-nosed cops. The son of a police officer, Akins never seemed short of work and appeared in nearly 100 films and 180+ TV episodes in a career spanning over 40 years. He originally attended Northwestern University, and went on to serve with the US Army Signal Corps in World War II in Burma and the Phillipines. Upon returning, he reignited his interest in art and drama and first appeared in front of the camera in 1953 in From Here to Eternity (1953). He quickly began notching up roles in such TV shows as Dragnet (1951), My Friend Flicka (1955), Gunsmoke (1955) and Zane Grey Theatre (1956). He also turned in several strong cinematic performances, such as gunfighter Joe Burdette in the landmark western Rio Bravo (1959), Mack in the excellent The Defiant Ones (1958), Sgt. Kolwicz in Merrill's Marauders (1962) and Earl Sylvester in the gripping The Killers (1964). In the early 1970s Akins turned up in several supernatural TV films playing "no-nonsense" sheriffs in both The Night Stalker (1972) and The Norliss Tapes (1973), and was unrecognizable underneath his simian make-up as war-mongering Gen. Aldo in Battle for the Planet of the Apes (1973). Akins continued starring in films and TV right up until the time of his death from cancer in 1994. By all reports a very gregarious, likable and friendly person off screen, Akins was married for over 40 years to Theresa "Pie" Fairfield, and had three children, Claude Marion Jr., Michele & Wendy.

Battle for the Planet of the Apes