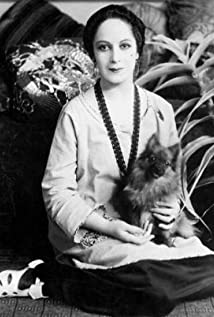 Lovely brown-eyed, brunette Claire Du Brey enjoyed a rich, four-decade film career in all. Born Clara Violet Dubrey on August 31, 1892, in Bonner's Ferry Idaho, her family traveled the rugged Sierra Madre terrain by covered wagon in their move to California when she was 13.Educated in a convent setting and once trained to be a nurse, Claire responded to an newspaper ad and found employment working part time in motion pictures. From there, she found herself in front of the camera, making her movie debut as star Billie Burke's friend in the Triangle release Peggy (1916). Universal saw a leading lady vamp in her, however, and from 1917 she enjoyed star billing in such silent short and feature-length vehicles as Princess Dione in the Rex Ingram-directed The Reward of the Faithless (1917); The Fighting Gringo (1917), opposite Harry Carey; Anything Once (1917) and The Winged Mystery (1917) both co-starring Franklyn Farnum; Brace Up (1918) with Herbert Rawlinson; the family drama The Magic Eye (1918); and A Man in the Open (1919) with Dustin Farnum. She also appeared in a number of Lon Chaney's early Universal vehicles such as The Rescue (1917) Pay Me! (1917) and Triumph (1917).A versatile player whether asked to portray royalty, servants, temptresses or prairie flowers, Claire turned to Los Angeles stage plays during an early 1920s lull in film offers and graced such vehicles as "Madame X," "Spring Cleaning" and "The Youngest". Later "jazz age" film roles included The Sea Hawk (1924), Drusilla with a Million (1925) Exquisite Sinner (1926), and The Devil Dancer (1927).During the declining period of her career (1928), Claire met actress Marie Dressler and they became close friends. Claire wound up serving as Dressler's secretary, fan mail handler and travel companion. In reward, Dressler arranged for Claire to get small roles a few of her talking films Politics (1931) and Prosperity (1932). She also served as Dressler's nurse in 1933 when the elder woman was dying of cancer.As a character actress, Claire became much in demand throughout the late 1930s, 1940s and 1950s, appearing in general purpose roles as secretaries, nurses, salesladies, housekeepers, matrons, spinsters, relatives, etc. On a rare occasion she managed to stand out, none more so than in her mad scene as Bertha Rochester in a "B"-level version of Jane Eyre (1934) starring Colin Clive and Virginia Bruce. Seen sporadically on TV into the 1950s, she retired by the end of the decade. Her last film roles were in Girls Town (1959) and The Miracle (1959), both unbilled.An early marriage to a doctor, Mark Gorman, ended in divorce. She lived another four decades after leaving the limelight. In her final years she grew deaf and her health quite fragile, dying at the age of 100 on August 1, 1993.

Phantom of the Rue Morgue

Jack and the Beanstalk

Ace in the Hole