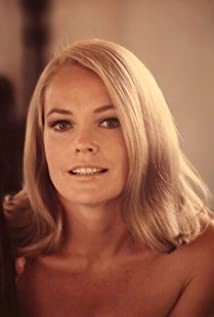 She was just one of a myriad of beautiful, statuesque, bikini-clad blondes who pranced and romped about the sand and surf of the California shores in all those nostalgic beach party movies of the "swinging '60s". In the great perky tradition of fellow blondes Sandra Dee, Linda Evans, Yvette Mimieux, and the late Sharon Tate, stunning Chris Noel, at the time, did what she did best: distract male viewers from some of the silliness around her. However, she has been less remembered than the aforementioned lovelies, all of whom went on to bigger and better things in their careers. Chris took an entirely different, and much more meaningful, route, altogether.She was born near the water in 1941, albeit a different beach locale--West Palm Beach, Florida, to be exact. She took the standard route--cheerleader, model, beauty pageant winner--that most gorgeous girls take when trying to crash Hollywood. The incredibly photogenic teen seemed tailor-made for the camera and, sure enough, by 1963, she was appearing in her first film, Soldier in the Rain (1963), starring Steve McQueen. After a few other minor efforts, Chris received her first "Annette Funicello"-like star billing in Beach Ball (1965), opposite Edd Byrnes, in the Frankie Avalon role. But, it was the specialty performers--The Supremes, The Four Seasons and The Righteous Brothers--who were noticed in that flick, not the actors. Wild Wild Winter (1966) provided Chris a second chance as a lead and she also booked a secondary femme part in Elvis Presley's Girl Happy (1965), but nothing much came out of them, either. Though Chris made appearances in such TV series as Perry Mason (1957), Bewitched (1964) and a few Bob Hope specials, she was not satisfied with her career...or her life.A tour of a VA hospital in 1965 altered her destiny, forever. Based on her minor pin-up celebrity, Chris impulsively auditioned for the Armed Forces Network (AFN) and started hosting her own radio show for the GIs in Vietnam, frequently flying to that war-torn country and visiting remote areas considered too risky for Bob Hope's USO shows. She became the GIs' favorite sexy radio and show personality while putting her own life on the line. As it turned out, Vietnam veterans would become her prime mission and life's work long after the war. In the 1970s, Chris began to suffer from postwar trauma. Any attempt to resurrect her Hollywood career in the 1970s and 1980s would be short-lived due to her stress, ill health and depression. Moreover, her first husband, a Green Beret captain (they married in Vietnam) suffering from the same postwar syndrome as Chris, killed himself during the Christmas holiday season of 1969. Chris' two subsequent marriages also ended in divorce.Persevering, she ventured into the operation of shelters for veterans in Florida during the 1990s, becoming a durable symbol for those who fought the unpopular fight. Chris Noel--a remarkable, courageous lady who could have just rested on her laurels as another beautiful Hollywood face, but didn't. She deserves to be remembered as such.

My Mother the Car

Get Yourself a College Girl

Soldier in the Rain