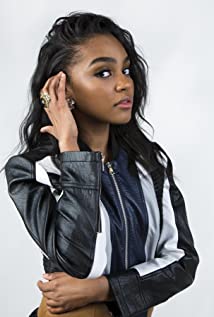 China Anne McClain comes from an artistic family. Her father, Michael McClain, is a music producer, vocalist, writer and sound engineer. His first production was on Beyonce's younger sister, Solange Knowles (Solo Star CD - track no.16 entitled Sky Away). China Anne's mother, Shontell, is also a vocalist and songwriter. China Anne and her two sisters, Sierra and Lauryn, formed a singing group they lovingly call "3mcclaingirls". They have completed their first song, "Silly Games". The music was produced by their father's production company, Gabesworld Music and co-produced by Larry Nix. The song was also written and co-produced by their mother. China Anne's younger brother, Gabriel (age 4) also acts, sings, dances and does handstands with ease! The family's music production company, GabesWorld Music is named after Gabriel.Ian Burke, a family friend, was over for dinner and China Anne performed a song from Spy Kids 2. Ian made a phone call to a director named Rob Hardy who was searching for a young girl who could sing and act to play Alexis in his upcoming film, The Gospel. China Anne had her 1st audition with Rob Hardy and discovered months later that she was chosen to play the character, Alexis. China Anne's sisters, Sierra Aylina McClain and Lauryn Alisa McClain, also appear in the Children's Gospel Choir scene of the movie.Since filming The Gospel, China Anne has continued to audition for casting directors in Georgia, North Carolina, Illinois and California. She appears in a park scene playing with a dog and in an after school scene of the upcoming film, Madea's Family Reunion. She was also recently interviewed by Jacque Reid at BET on the red carpet at The Gospel premiere in Atlanta, Georgia.China Anne is also an active member of Screen Actors Guild. She is funny, talented, extremely disciplined and has mature self-control. Her favorite part about filming movies is the time she spends in hair and make-up. Her performance and genuine, kind spirit garnered her rave reviews from her fellow actors, cast and crew. Their on-going support inspires China Anne to continue to perform and learn more about her passion - Acting.China Anne's hobbies are singing, dancing, drawing elaborate greeting cards and going to church with her family. She enjoys memorizing the lines of various Disney movies and loves to audition. China Anne is an exceptional student and reads chapter books with ease. She is an expert with a hula-hoop and just learned to roller-blade this past summer. Her dream is to someday write and direct her own films and to go on the road performing with her sisters.

Under the Sea: A Descendants Story

How to Build a Better Boy