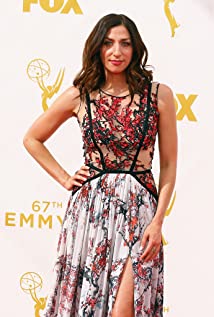 Chelsea Peretti is a stand-up comedian, actress and writer who appeared in FOX's Brooklyn Nine-Nine (2013). The show won two Golden Globe Awards in 2014 including one for Best Television Series - Musical or Comedy.Peretti starred alongside Andy Samberg, Terry Crews and Joe Lo Truglio as 'Gina Linetti,' the 99th precinct's administrator. Entertainment Weekly called Peretti one of the "buzziest breakouts" and the New York Post called her a "comedic gem, whose dry wit is unparalleled." Chelsea was nominated for Favorite Comedy Supporting Actress - Television for the 2014 American Comedy Awards and "Brooklyn Nine-Nine" also received a nomination for Favorite Comedy Series. "Brooklyn Nine-Nine" was nominated for a 2014 People's Choice Award for Favorite New TV Comedy and received a Satellite Award nomination for Best Television Series, Comedy or Musical. The hit series was just picked up for a eighth season.Peretti had a recurring role as 'Farley' on the popular sketch comedy series for Comedy Central, Kroll Show (2013) and has appeared on Louie (2010) and Tosh.0 (2009) and she also plays multiple characters on Adult Swim's China, IL (2008). Peretti has been praised as one of Variety's "Top 10 Comics to Watch," Comedy Central's "Hotlist" comedians, and in Vanity Fair's 2013 "Comedy" issue. She was also recognized by TIME magazine as having one of the "140 Best Twitter Feeds" of 2013.Peretti is also an accomplished writer, having written for Parks and Recreation (2009), Saturday Night Live (1975), The Sarah Silverman Program. (2007), Portlandia (2011) and Kroll Show (2013).Peretti tours her stand-up at comedy clubs, theaters and festivals across the world.

Chelsea Peretti: One of the Greats