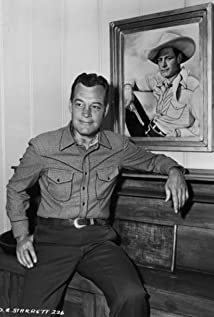 While on the Darmouth College football team, Charles Starrett was hired to play a football extra in The Quarterback (1926). Impressed by the job, Starrett got the acting bug and next went into vaudeville, then regional stage work and finally to Broadway. Spotted by a Paramount talent scout, Starrett was signed to play the romantic lead in Fast and Loose (1930). For the next couple of years he would be busy, but his roles were unremarkable. In 1933 he would be one of the people who helped organize the Screen Actors Guild. In 1936 he would sign with Columbia and over the next 16 years star in 115 westerns. Appearing in as many films as he did, he was usually called "Steve" something - such was life on the "B" circuit. During the 1940s Starrett would always be among the top ten western stars. After playing assorted sheriffs and rangers, he would become well known for his role as the "Durango Kid". Never ask where he kept the white horse and the clothes, but he could change outfits and horses before the gun could clear the leather. The Durango Kid first appeared in 1940, and towards the end of his career he would play the Durango Kid in almost every film, even though he was starting to show his age. When the "B" movie westerns rode off into the sunset in the early 1950s, Starrett hung up his spurs for good.

The Mask of Fu Manchu