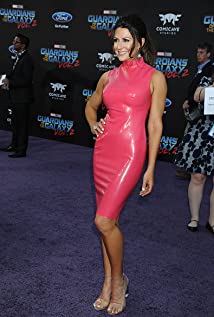 Cerina Vincent is an actress, author, and producer with a fan base that spans all age groups and genres.Born and raised in Las Vegas, NV, she had a childhood in theatre and musicals from the age of 12. After hanging up her crown as Miss Nevada Teen USA 1996, she moved to Hollywood and began working in film and television. Cerina starred in the #1 kid's series in the world, Power Rangers Lost Galaxy as "Maya, The Yellow Power Ranger." And quickly went from a TV superhero to a silver screen siren from her "Saturn Award" nominated performance in the horror sensation Cabin Fever, and her daring, comedic role in Not Another Teen Movie. World renown as a "scream queen," horror fans also love her in Return to House on Haunted Hill, It Waits, MoniKa, Tales of Halloween and dozens of other genre-fan favorites, including a mini-series for AMC'S, The Walking Dead, and "Darkened Room, " a short film written for her and directed by David Lynch.Cerina's comedy and drama can be seen on dozens of hit shows including Two and a Half Men, Mike and Molly, Workaholics, Californication, CSI and NCIS to name a few. Cerina just wrapped 3 seasons of Disney Channel's Stuck in the Middle where she quickly became kids favorite "TV Mom," as "Suzy Diaz" the quirky, frazzled, loving mother of 7 children. Cerina's latest movie, My Daughters Psycho Friend, premiered on Lifetime, and she just wrapped the lead role in another Lifetime thriller, Secrets in the Water, where she plays a grieving mother.Cerina has also co-wrote the best-selling How to Eat Like a Hot Chick, How to Love Like a Hot Chick, and Live Like a Hot Chick from Harper Collins. She's been on The Today Show dozens of times giving her irreverent yet inspiring lifestyle advice for women, as well as blogged for The Huffington Post.Cerina works every year to raise money for The Cystic Fibrosis Foundation, and The Life After Project which supports mental health and suicide prevention.