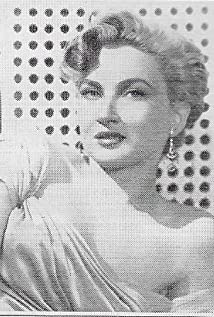 She was one of a bevy of sexy blondes shuffled about in 50s films, thrust into the limelight by ambitious movie studios as possible contenders to Marilyn Monroe's uncooperative pedestal. Almost none of these ladies managed to even step up to the plate when it came to the powerful allure of "La Monroe" and starlet Carol Ohmart managed to be no different.Armelia Carol Ohmart was born in Salt Lake City, Utah on July 3, 1927, the daughter of a dentist father (Thomas Carlyle Ohmart, a one-time actor) and an abusive Mormon mother (Armelia Merl Ohmart). Raised in Seattle and a baby contest winner as an infant, she was on stage from age 3 in a vaudeville act with her uncle. She then lived all over the place with her mother after her divorce from her father, attending high school at Lewis & Clark High in Spokane. A radio singer back in Salt Lake City, Carol won the "Miss Utah" title (then a brunette) at age 19, coming up fourth runner-up when she segued into the 1946 "Miss America" contest (came in 4th). The attention she received led to a modeling, commercial and magazine cover career.In the early 1950s Carol found TV and commercial work and on stage on Broadway (in the ensemble of "Kismet" and also as Joan Diener's understudy) and summer stock. Paramount took interest after a talent agent caught her in "Kismet" and signed her in 1955, billing her, of course, as the "next Marilyn." But Carol came off more hardbitten and unsympathetic than the vulnerable, innocent sex goddess, and when the knockout blonde's first two movies The Scarlet Hour (1956) and The Wild Party (1956) tanked at the box office, she was written off in 1957. Only a few more film offers came her way, including director William Castle's gimmicky House on Haunted Hill (1959) (her best known); the campy horror Spider Baby or, the Maddest Story Ever Told (1967); and her last, The Spectre of Edgar Allan Poe (1974). She had steadier work on TV with guest appearances on "Bat Masterson," "Perry Mason," "Get Smart," "Mannix" and "Barnaby Jones," but by 1974 she retired from the screen.Carol wed three times. The first, to radio actor Ken Grayson, lasted two years before it was annulled. A second brief two-year marriage in 1956 was with cowboy actor Wayde Preston (ne William Erskine Strange), who starred in the rugged "Colt .45" TV western. In the late 1970s, she married a third time to a non-professional (fireman), which lasted. After a particularly depressing period dealing with medication addiction and disability, a recovered, spiritual-leaning Carol found a helpful avenue outside the Hollywood scene in the 1970s studying metaphysics, delving also in oil painting, gardening, poetry and writing. She died on New Year's Day, 2002, at age 74, in Colorado.

The Spectre of Edgar Allan Poe

Spider Baby or, the Maddest Story Ever Told