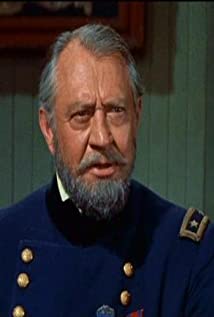 Carl Benton Reid was a drama graduate from Carnegie Tech who had several years of stage experience performing at the Cleveland Playhouse in the 1920s, where he met his future wife, stage actress Hazel Harrison. After moving to New York, he became a noted actor on the Broadway stage with some impressive credits to his name. Between 1929 and 1949, he appeared in such illustrious plays as "Life with Father" (in the title role), Anton Chekhov's "The Cherry Orchard" (with Eva Le Gallienne) and Eugene O'Neill's Theatre Guild Production of "The Iceman Cometh". As to Reid's Harry Slade in "Iceman", the noted critic Brooks Atkinson commented for the New York Times (10/10/1946): "as the barroom's (sic) master of cosmic thinking, Carl Benton Reid is vigorously incisive and lends substance to the entire performance". Reid's stern demeanor lent itself to playing all sorts of tough characters, particularly heavy fathers, which he did ably (and often) as in "Strange Bedfellows" (1947). Way back in 1942, Atkinson had remarked on his energetic performance in the title role of the comedy "Papa is All": "Reid plays Papa with a snarl and ferocity that make the wreck at the railroad crossing an occasion of civic betterment" (NY Times, March 21, 1973).In 1941, Reid left for Hollywood to recreate his stage role of Oscar Hubbard in the outstanding film adaptation of Lillian Hellman's play "The Little Foxes". Shot at RKO Studios, it was brilliantly directed by William Wyler. With his customary scowl and icy delivery, Reid was perfect as one of two avaricious brothers (the other was played by Charles Dingle) of equally venomous turn-of-the century Southern aristocrat Regina Giddens (whose part was played on stage by Tallulah Bankhead and in the film by Bette Davis). Reid's powerful performance ensured many more years of regular employment in films, though none of his subsequent roles ever came close to repeating his earlier success. However, Reid found a new lease of life on the small screen, invariably as senior military brass (Yancy Derringer (1958), 12 O'Clock High (1964)) or elder statesmen (Target: The Corruptors! (1961)), even occasionally as murder victims (Perry Mason (1957)) or spy masters (Burke's Law (1963)).