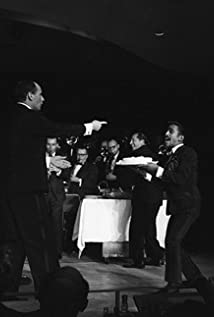 Buddy Lester, stand-up comedian and character actor on television and in motion pictures was born in Chicago and became a fixture on the international nightclub circuit for seven decades. In Las Vegas, he opened for Frank Sinatra several times and appeared in the Rat Pack films Ocean's 11 (1960) and Sergeants 3 (1962) . Lester also appeared with Jerry Lewis in five films,The Ladies Man (1961), The Nutty Professor (1963), The Patsy (1964), Three on a Couch (1966) and The Big Mouth (1967). Lester made his film debut playing himself as an entertainer in The Gene Krupa Story (1959) starring Sal Mineo. The comedian proved even more popular on television, and was a part of the regular cast of The New Phil Silvers Show (1963). Lester also appeared in several episodes of the police series' Adam-12 (1968) and Barney Miller (1975) and was also a familiar face on Love, American Style (1969), The New Dick Van Dyke Show (1971), The Odd Couple (1970) and Starsky and Hutch (1975).A handsome man with dark hair, Lester could assume mockingly menacing personas because of a somewhat mysterious scar to the right of his mouth. He delighted in making up various stories about how he acquired it. He frequently said he got the scar when he was blown off a barge at Guadalcanal. He once used it to intimidate beefy rabble-rousers at a nearby table when he was watching friends on stage in a Chicago nightclub. And in a New York hotel, he told a group of Germans that he got the scar in a fencing duel while he was a student in Heidelberg. The truth, he confessed to the now-defunct Los Angeles Mirror in 1961, was: "I fell off a chair onto a broken water glass when I was 3 years old." Lester once considered plastic surgery to erase the mark, but changed his mind after a movie makeup artist liked it so much that he enlarged it for Lester's scenes.Lester died Friday Oct. 4, 2002 of cancer in a Van Nuys nursing home. He was 86. Lester was survived by his son, Paul; daughter, Sylvia Jensen; four grandchildren and three great-grandchildren.

The Man from Clover Grove

Three on a Couch