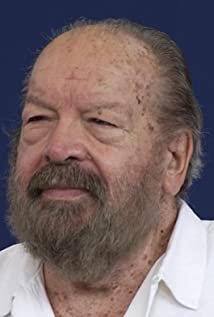 Bud Spencer, the popular Italian actor who starred in innumerable spaghetti Westerns and action-packed potboilers during the 1960s and 1970s, was born Carlo Pedersoli on October 31, 1929, in Naples. The first Italian to swim the 100-meter freestyle in less than a minute, Spencer competed as a swimmer on the Italian National Team at the Olympic Summer games in both Helsinki, Finland, in 1952 and Melbourne, Australia, in 1956. He was also an Olympic-class water polo player.Educated as an attorney, he was bitten by the acting bug and appeared as a member of the Praetorian Guard in his first movie, MGM's epic Quo Vadis (1951) (which was shot in Italy) in 1951. During the 1950s and first half of the 1960s he appeared in films made for the Italian market, but his career was strictly minor league until the late 1960s. He changed his screen name to "Bud Spencer" in 1967, as an homage to Spencer Tracy and to the American beer Budweiser. Spencer allegedly thought it was funny to call himself "Bud" in light of his huge frame.After the name change, Spencer achieved his greatest success in spaghetti Westerns lensed for a global audience. Teaming up with fellow Italian Terence Hill, the two made such international hits as Ace High (1968) and They Call Me Trinity (1970) ("They Call Me Trinity"). Their dual outings made both stars famous, particularly in Europe. In all, Spencer made 18 movies with Hill.He became a jet airplane and helicopter pilot after appearing in All the Way Boys (1972) and owned an air transportation company, Mistral Air, which he founded in 1984. However, he terminated his business interest in Mistral and entered the children's clothing industry. After 1983 Spencer's movie career slowed down, though he did have a big success in the early 1990s with the TV action-drama series "Extralarge". A man of many talents, Spencer wrote screenplays and texts for some of his movies. He also has registered several patents.Spencer married Maria Amato in 1960 and they have three children, Giuseppe (born 1961), Christine (1962) and Diamante (1972).In 2005 Spencer entered politics, standing as regional councillor in Lazio for the center-right Forza Italia party. He became a politician specifically at the bequest of then-Prime Minister Silvio Berlusconi. According to Spencer, "In my life, I've done everything. There are only three things I haven't been - a ballet dancer, a jockey and a politician. Given that the first two jobs are out of the question, I'll throw myself into politics."Berlusconi, who was a media tycoon in the vein of Rupert Murdoch before he entered politics, recruited Spencer as he was "still a major draw for the viewer, alias the voter." Critics of Berlusconi--who tried to retain power by launching a campaign to portray his allies as the embodiment of "good" and the leftists of the opposition as "evil"--was derided as an example of "politica spettacolo" ("showbiz politics").Spencer announced his new career at a "Felliniesque" press conference at a Rome hotel, at which he hardly moved and had little to say except homilies about upholding family values. Spencer sat between two Forza Italia handlers, and according to one major Italian newspaper, "From one moment to the next, you expected this mountain of a man to grab the heads of the two presenters and smack them together in his usual style, as he has been seen doing countless times on the big screen and television." The audition proved to be a flop: Spencer lost the seat, and Berlusconi's party was swept from power in 2006.

Killing Is My Business, Honey