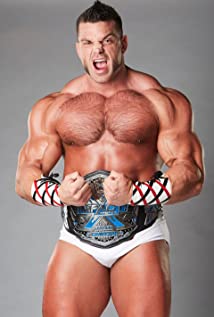 is an American bodybuilder and professional wrestler, best known as Brian Cage. Cage is currently working for Lucha Underground and Impact Wrestling. He performs regularly for the Southern California-based promotion Pro Wrestling Guerrilla (PWG), where he is a former one-time World Tag Team Champion with Michael Elgin. Cage also wrestled under the name Kris Logan at Florida Championship Wrestling (FCW). Cage began his love of want to be a professional wrestler like any normal kid by watching it on television. During those early year Cage became friends with Chris Kanyon following a show that was held in Sacramento at Arco Arena where he made a sign that Kanyon noticed. Following the end of that show Cage met Kanyon and the two eventually became friends and Cage's biggest influence in his decision to pursue professional wrestling as a career. This eventually led to him and his friends starting their own Federation in 2004 called Main-Event Wrestling Federation or MWF for short. Cage's wrestling debut happened when he officially wrestled Kanyon for the first time at an MWF show. This eventually lead to a second show where Kanyon once again faced Cage. Cage ended up winning both matches against Kanyon. During this time, Cage had been training at Pro Championship Wrestling. Cage then made a name for himself and competed at All Pro Wrestling. This continued until Cage, under Kanyon's advise, left to move to Atlanta to be in WWE's then developmental territory Deep South Wrestling. Deep South Wrestling (2006-2007) While not officially signed with Deep South Wrestling, Cage competed in matches with current WWE Superstars Kofi Kingston, Heath Slater, Brodus Clay and Zack Ryder. When WWE ended its ties with DSW, Cage left to come back to California. However, before Cage left Kanyon asked Cage to become Mortis so that someday if Kanyon ever decided to make a come back that he could still have his name out there. This was seen as a great honor to Cage and he gladly accepted to become Mortis whenever he was asked to appear as Mortis and not Brian Cage. Cage is the only person other than Kanyon that has portrayed the Mortis character. Independent Circuit (2007-2008) Cage again came back to home State of California and made a name by wrestling in promotions such as All Pro Wrestling, Supreme Pro Wrestling, and Fog City Wrestling. Cage had one his final Indy matches at Supreme Pro Wrestling in Sacramento against Adam Thornstowe. Near the end of 2008 when Cage was resigned with WWE he gave the Mortis outfit back to Kanyon who had decided to make a return to the ring as himself and as Mortis. However, when Kanyon passed away, Cage was unable to get the Mortis outfit back from Kanyon's Family. Cage had wanted to be able to carry on Kanyon's memory by continuing to portray Mortis.