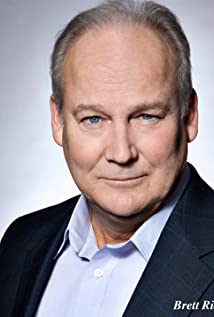 Brett Rice was born in Chattanooga, Tennessee, the oldest of four children. He attended a number of schools until finally, he was sent to Marist Military Academy in Atlanta, after which he had a short spell in the Army. One day Brett went with a friend to the theater building to wait as he auditioned for a show. While he waited the director asked him if he wanted to audition. He landed a role and from that moment on lived, ate and drank the theater. For the next five years he went to every theater in Atlanta and auditioned for almost everything that came along. This included a TV pilot for The Catlins (1982) which led to a two year contract. He got a part in The Bear (1984), with Gary Busey and then a role in a TV movie called Poison Ivy (1985), with 'Michael J. Fox', 'Adam Baldwin' and Nancy McKeon. Work dried up until Brett started a fantastic run of luck in which he worked solidly thru the 90s. He played in due TV shows such as I'll Fly Away (1991), In the Heat of the Night (1988), Walker, Texas Ranger (1993), and many more. Theatrical Films included Forrest Gump (1994), Edward Scissorhands (1990), Kalifornia (1993), Passenger 57 (1992), From the Earth to the Moon (1998), The Waterboy (1998) and most recently as a co-star in Remember the Titans (2000) in which he played Coach Tyrell opposite Denzel Washington and 'Will Patton'. Brett has a guest appearance on the television show, Sheena (2000). The episode, 'Stranded in the Jungle' will be shown in 2002. Brett has over 75 credits for TV and Film, and at least that many credits for the stage. He has become a Councilor at Large with SAG to get more closely involved with the unusual politics and negotiations with producers in LA and NY.