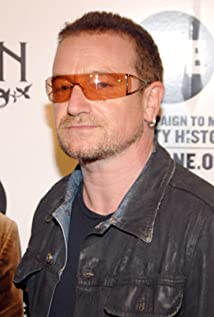 Bono was born Paul David Hewson in Dublin, Ireland on May 10, 1960, to Iris (Rankin) and Brendan Robert Hewson. He has been the lead singer of the rock band U2 since 1976. U2 has won 22 Grammy Awards to date, and was inducted into the Rock and Roll Hall of Fame in 2005. Lauded by fans and critics as an outstanding performer and songwriter, Bono has also been praised by world leaders as an accomplished activist due to his powers of persuasion and knowledge of the issues. He travels extensively to give speeches and lobby politicians. Bono's career as a socially conscious musician has been shaped by childhood experiences in Ireland as well as volunteer work in Africa and South America. He married his childhood sweetheart Ali Hewson in 1982, and actress Eve Hewson is among their children. An accomplished activist in her own right, Ali Hewson once declined an invitation to run for President of Ireland because her husband "would not move to a smaller house". They live in Dublin with their four children: Jordan, Memphis Eve, Elijah Bob Patricius Guggi Q and John Abraham.Bono was nominated for the Nobel Peace Prize in 2003 for his successful efforts to relieve third world debt and promote AIDS awareness in Africa. He received the rank of Chevalier dans I'Ordre de la Legion d'Honneur (Knight in the Order of the Legion of Honor) from French President Jacques Chirac on February 28, 2003.

He Named Me Malala

Who the F**K Is Arthur Fogel