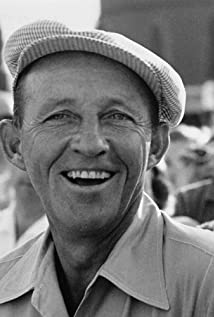 Bing Crosby was born Harry Lillis Crosby, Jr. in Tacoma, Washington, the fourth of seven children of Catherine (Harrigan) and Harry Lincoln Crosby, a brewery bookkeeper. He was of English and Irish descent. Crosby studied law at Gonzaga University in Spokane but was more interested in playing the drums and singing with a local band. Bing and the band's piano player, Al Rinker, left Spokane for Los Angeles in 1925. In the early 1930s Bing's brother Everett sent a record of Bing singing "I Surrender, Dear" to the president of CBS. His live performances from New York were carried over the national radio network for 20 consecutive weeks in 1932. His radio success led Paramount Pictures to include him in The Big Broadcast (1932), a film featuring radio favorites. His songs about not needing a bundle of money to make life happy was the right message for the decade of the Great Depression. His relaxed, low-key style carried over into the series of "Road" comedies he made with pal Bob Hope. He won the best actor Oscar for playing an easygoing priest in Going My Way (1944). He showed that he was indeed an actor as well as a performer when he played an alcoholic actor down on his luck opposite Grace Kelly in The Country Girl (1954). Playing golf was what he liked to do best. He died at age 74 playing golf at a course outside Madrid, Spain, after completing a tour of England that had included a sold-out engagement at the London Palladium.

Top of the Pops: The True Story