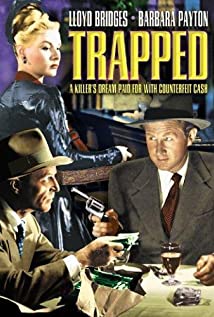 One of the saddest tales ever to come out of Hollywood has to be that of Barbara Payton. A blue-eyed, peroxide blonde sexpot who had a lot going for her, her life eventually disintegrated, mostly by her own doing. Things started out well enough for Barbara Lee Redfield, born on November 26, 1927, in Cloquet, Minnesota. From a modest, blue-collar background, she grew up to be a drop-dead gorgeous young woman and, following a quickie marriage at age 19, decided to leave home for good to try to capitalize on her good looks in Tinseltown. She headed for Hollywood in 1948 and, within a short time, was placed under contract by Universal, where she began the typical starlet route of bit parts. She reached her peak with routine but promising co-star work opposite James Cagney in Kiss Tomorrow Goodbye (1950), Gary Cooper in Dallas (1950) and Gregory Peck in Only the Valiant (1951). Although her talent (5) was overshadowed by her brassiness (10) and looks (10), her slightly lurid appeal seemed to be enough to carry her through. Caught up in the glitz and glamor, however, her career started taking second place to a reckless life full of capricious romances involving a number of top stars and producers, many of them married. One of her more famous trysts ended up making headlines for her, and none of them favorable. She was juggling two boyfriends at the same time, classy "A" actor Franchot Tone and muscular "B" actor Tom Neal, and they fought almost to the death for Barbara's affections. On September 13, 1951, the men engaged in a deadly brawl and when it was over, Tone was in the hospital with broken bones and a brain concussion. Barbara ended up with both a black eye and a tarnished reputation. She married Tone after he recovered, but left him after only seven weeks and returned to the violence-prone Neal. That abusive relationship lasted four years, though they never married. During that time Barbara's career had plummeted to the point where she was making such dismal features as Bride of the Gorilla (1951). She went to England to try to rejuvenate her career, but no dice; it was over and her life was skidding out of control. Her once beautiful face now blotchy and her once spectacular figure now bloated, Barbara sank deeper into the bottle. From 1955 to 1963 there were various brushes with the law - among them passing bad checks, public drunkenness and, ultimately, prostitution. She was forced to sleep on bus benches, was beaten and bruised by her tricks, and lost teeth in the process. In 1967, after failed efforts to curb her drinking, she finally moved in with her parents in San Diego to try to dry out. It was too late. On May 8, 1967, the 39-year-old former starlet was found on the bathroom floor - dead of heart and liver failure. Somehow through all this misery she managed a tell-all book ironically entitled "I Am Not Ashamed" (1963).

Murder Is My Beat