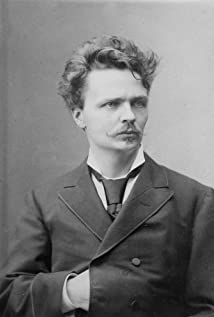 He started to study at the Uppsala University but dropped out to pursue an economically unstable career as a journalist. In 1872 he published the first of his many masterpieces, 'Mäster Olof'. In 1874 he got a position at the Royal Library in Stockholm, which enabled him to marry 'Siri von Essen'. He published his novel 'Röda rummet' in 1879, a novel critical towards the press, the church, the publishers, the parliament and the state departments. With it he started the realism of the 1880s in Swedish literature. By the middle of the 1880s he had enemies everywhere and moved to Switzerland. With his novels 'Giftas' his hostility towards women increased, partly as a result of marital problems. His spoof of the holy communion lead to charges of blasphemy. At the end of the 1880s he wrote several novels about life in the archipelago, for example the successful novel 'Hemsöborna'. At the beginning of the 1890s he was briefly married to the Austrian 'Frida Uhl'. After the divorce he moved to Paris and studied ocultism and alchemy. He suffered from a psychological crisis. In 1901 he married actress Harriet Bosse for whom he wrote the play that he himself considered his best, 'Ett drömspel'. Today he is today considered one of Sweden's most important writers.