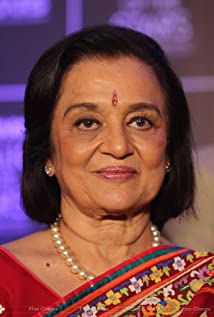 Asha Parekh was born in a middle-class Gujarati household to a Hindu father, Pranlal Parekh, and a Muslim mother Sudha Parekh on October 2, 1942 in India. Since she was an only child, she became the center of her parents' lives. Her mother enrolled her in classical dance classes at an early age, and Asha excelled at dance to the point where she performed at stage shows. Famed film director Bimal Roy saw her dance at a stage function and cast her at the tender age of ten in Mother (1957). He liked her and cast her again in Baap Beti (1954). The film's failure disappointed her, and even though, she did a few more child roles, she quit to resume her schooling. At sixteen, she decided to try acting again and make her debut as a heroine, but director Vijay Bhatt fired her from Goonj Uthi Shehnai (1959) claiming she wasn't star material. Almost immediately, film producer Sasadhar Mukherjee and writer-director Nasir Hussain cast her as the heroine in Dil Deke Dekho (1959) which made her a huge star. Shammi Kapoor became her favorite hero and friend, and they starred in three more films, the most famous being the murder mystery Teesri Manzil (1966). The film also led to a long and fruitful association with Nasir, and he cast her as the heroine in six more films.Her fame gave her enough leverage to get producers to hire her mother Sudha Parekh to design her costumes for most of the films that she starred in. A fallacy that surrounded her was that she was generally considered a glamorous dancer/tomboy and not a serious actress until director Raj Khosla cast her in the tragedienne role in the hit film Do Badan (1966). The truth was directors and audiences knew early on that she had genuine acting talent. She won the Gujarat State Award for Best Actress for her first Gujarati film Akhand Saubhagyavati (1963). And she easily compensated for non-actors like Joy Mukherjee and Biswajit in Hindi films, while holding her own against acting giants like Ashok Kumar.Important directors were casting her and repeating her in their films, but Asha also brought out jealousies from her female co-stars. Simi Garewal claimed that Asha tried to cut her part down in "Do Badan", but Asha insisted that she never did that, and as proof, she showed that Simi won the Filmfare Award as Best Supporting Actress for the film. The "Do Badan" team also stood by Asha, especially the director Raj Khosla who later cast her in three more films. Her leading man Manoj Kumar soon directed and starred opposite her in his blockbuster Upkar (1967), which also won the Filmfare Best Picture Award.Although Asha earned the title "Jubilee Girl" because of the continuous string of box office successes, such as Ziddi (1964), Shikar (1968), Aan Milo Sajna (1970), she also hit a rare bump with Raj Khosla's Chirag (1969). But she also earned her first Filmfare nomination as Best Actress for the film, and Khosla didn't blame her for the film's failure and in fact, cast her soon again and came up with a huge hit, Mera Gaon Mera Desh (1971). However, success brought controversy. Once again, a female co-star claimed that Asha cut her role down in the film. This time, Asha confronted Laxmi Chhaya directly and told her to think before she spoke as Padma got twice the number of songs than Asha did in "Mera Gaon Mera Desh". Aruna Irani allegedly said that Asha reduced her role in Nasir Hussain's box-office smash Caravan (1971), but facts back up Asha that she would never cut another performer's role, as Aruna had more songs than Asha, and she received a Filmfare nomination, while Asha wasn't nominated for the film at all. However, Asha did win the much coveted Best Actress Filmfare Award for Shakti Samanta's Kati Patang (1970). She played a deglamourised woman in a white sari pretending to be a widow whose vulnerable smile hides a painful past. Asha was thrilled when she won the award, but Mumtaz, her box-office rival and former co-star from Mere Sanam (1965) and Bhai Bhai (1972), complained that she was more deserving for her own performance in Tere Mere Sapne (1971).Asha was hitting the heights of fame and glory even though she was now 30, an age where heroines normally would pack it in. But her passion for dancing sent her abroad on a extended trip to do dance shows and as a result, turned down important film roles. When she came back in 1973, she found that a younger and bolder breed of heroines like Hema Malini and Zeenat Aman got those roles and now ruled the roost. Asha focused on her distribution concern which she had started with Nasir Hussain when he directed her in the film Baharon Ke Sapne (1967) and would continue to do so for twenty more films. She also threw herself in her charity work, even having a Santa Cruz hospital named after her. She lived with her parents in her beautiful seaside bungalow, whose innovative design drew a lot of attention. Asha's passion with dance continued and her performance of famous dance ballets like "Chauladevi" won her acclaim. S