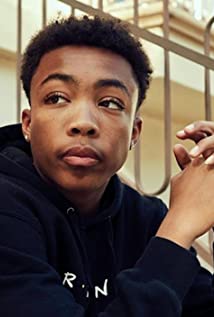 Asante Blackk is a passionate young actor who loves his craft. He was born and raised in Maryland to Ayize and Aiyana Ma'at both clinical social workers and couples therapists. His father's family is from Alexandria, Virginia and his mother's family is from North Carolina, London, England and Trinidad.Coming from a long line of preachers, social activists and counselors Asante grew up in a spiritually grounded and socially conscious family. His love for telling complex and compelling stories through his art comes from his belief that what he does has the power to heal and inspire in more ways than one. Asante hails from a family of artists as well. His mother has a love for singing and his father is a master of words and a poet in his own right. His grandfather, Dennis Wiley, is an accomplished songwriter and musician. He is also the nephew of Rashar Morton, a graphic design artist and the nephew of acclaimed Emmy-award winning actress, Samira Wiley.Asante started acting at only 6 years old. He was cast as Mowgli in The Jungle Book in 2008, which ignited his passion. Once Asante began high school he decided to take acting more seriously. He joined the Theater Department in his school and had the ability to take several theater and acting classes as he continued to hone his skills. During his freshman year he was cast as Bud in 'Father knows best' and Charlie in 'Willy Wonka and the Chocolate Factory'. Asante signed with a talent agency that same year and then went on to take roles later on in high school such as Harry the Horse in 'Guys and Dolls', and Montgomery in 'Fame'. Asante was also awarded Most Promising Actor at the state-wide Maryland Thespian Festival. He is the 2018-2019 President of the North Point High School Theater Club and provides encouragement and advice to other young people who want to act as well.Asante has worked with Nickelodeon to recreate the SpongeBob, Danny Phantom, and Teenage Mutant Ninja Turtles theme songs with a rap twist. He also played the role of Kevin Richardson in the Netflix limited series 'When They See Us', based on the widely known Central Park Five.Asante is the oldest sibling in his family and has 4 younger siblings who he adores. Despite a rigorous schedule, in his spare time, he loves to make short films of his own, cook, play basketball, write and play video games.