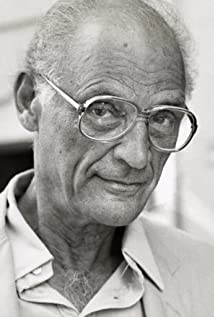 Arthur Asher Miller was born on October 17, 1915, in New York City, one of three children born to Augusta (nee Barnett) and Isidore Miller. His family was of Austrian Jewish descent. His father manufactured women's coats, but his business was devastated by the Depression, seeding his son's disillusionment with the American Dream and those blue-sky-seeking Americans who pursued it with both eyes focused on the Grail of Materialism. Due to his father's strained financial circumstances, Miller had to work for tuition money to attend the University of Michigan, where he wrote his first plays. They were successful, earning him numerous student awards, including the Avery Hopwood Award in Drama for "No Villain" in 1937.The award was named after one of the most successful playwrights of the 1920s, who simultaneously had five hits on Broadway, the Neil Simon of his day. Now almost forgotten except for his contribution to Gold Diggers of 1933 (1933), Hopwood achieved a material success that the older Miller could not match, but he failed to capture the immortality that would be Miller's. Hopwood's suicide, on the beach of the Cote d'Azur, reportedly inspired Norman Maine's march into the southern California surf in A Star Is Born (1937).Like Fitzgerald, Miller tasted success at a tender age. In 1938, upon graduating from Michigan, he received a Theatre Guild National Award and returned to New York, joining the Federal Theatre Project. He married his college girlfriend, Mary Grace Slattery, in 1940; they would have two children, Joan and Robert. In 1944, he made his Broadway debut with "The Man Who Had All the Luck", a flop that lasted only four performances. He went on to publish two books, "Situation Normal" (1944) and "Focus" (1945), but it was in 1947 that his star became ascendant. His play "All My Sons", directed by Elia Kazan, became a hit on Broadway, running for 328 performances. Both Miller and Kazan received Tony Awards, and Miller won the New York Drama Critics Circle Award. It was a taste of what was to come.Staged by Kazan, "Death of a Salesman" opened at the Morosco Theatre on February 10, 1949, and closed 742 performances later on Nov 18, 1950. The play was the sensation of the season, winning six Tony Awards, including Best Play and Best Author for Miller. Miller also was awarded the 1949 Pulitzer Prize for Drama. The play made lead actor Lee J. Cobb, as Willy Loman, an icon of the stage comparable to the Hamlet of John Barrymore: a synthesis of actor and role that created a legend that survives through the bends of time. A contemporary classic was recognized, though some critics complained that the play wasn't truly a tragedy, as Willy Loman was such a pathetic soul. Given his status, Loman's fall could not qualify as tragedy, as there was so little height from which to fall. Miller, a dedicated progressive and a man of integrity, never accepted that criticism. As Willy's wife Linda said at his funeral, "Attention must be paid", even to the little people.In 1983, Miller himself directed a staging of "Salesman" in Chinese at the Beijing People's Art Theatre. He said that while the Chinese, then largely ignorant of capitalism, might not have understood Loman's career choice, they did have empathy for his desire to drink from the Grail of the American Dream. They understood this dream, which Miller characterizes as the desire "to excel, to win out over anonymity and meaninglessness, to love and be loved, and above all, perhaps, to count." It is this desire to sup at the table of the great American Capitalists, even if one is just scrounging for crumbs, in a country of which President Calvin Coolidge said, "The business of America is business," this desire to be recognized, to be somebody, that so moves "Salesman" audiences, whether in New York, London or Beijing.Miller never again attained the critical heights nor smash Broadway success of "Salesman," though he continued to write fine plays that were appreciated by critics and audiences alike for another two decades. Disenchanted with Kazan over his friendly testimony before the House Un-American Activities Committee, the two parted company when Kazan refused to direct "The Crucible", Miller's parable of the witch hunts of Sen. Joseph McCarthy. Defending her husband, Kazan's wife, Molly, told Miller that the play was disingenuous, as there were no real witches in Puritan Salem. It was a point Miller disagreed with, as it was a matter of perspective--the witches in Salem were real to those who believed in them. However, subsequent research has shown that the cursorily-researched (at best) play contains fictional motifs (regarding Goodman and Goodwife Putnam and their offspring), limited research, and carelessness in identifying (or not identifying, as with William Stoughton) the true authors of the witch trials. Directed by another Broadway legend, Jed Harris, the play ran for 197 performances and won Miller the 1953 Tony Award for Best Play. Miller had

National Theatre Live: A View from the Bridge

Death of a Salesman